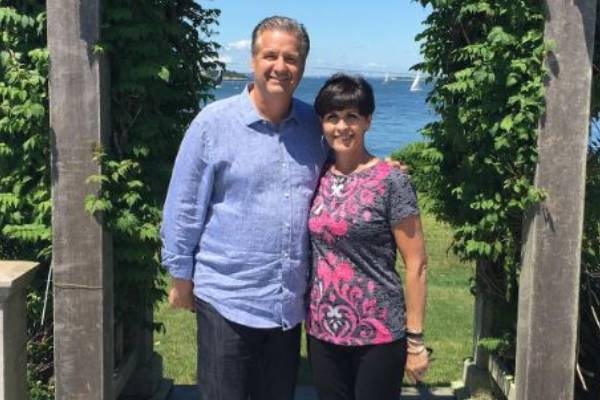 John Vincent Calipari, also known as John Calipari, is a well-renowned American basketball coach. He has been serving as a coach since 1982 and has gained significant fame. He is currently involved as the head coach at the University of Kentucky. Moreover, he has led his team to win many tournaments and even claimed some prestigious awards.

The college basketball head coach is a family man and lives a content life with his beloved wife and kids. It surely has been many years of John and his spouse’s marital life, and people want to know the secret behind the long-lasting marriage. Thus, without further ado, let’s look at this article about John Calipari’s wife, Ellen Calipari, and some interesting facts about her.

Met While Working At The University Of Kansas

As mentioned earlier, John is happily married to Ellen Higgins. The couple met while working at the University of Kansas. John was serving as an assistant coach for the university’s basketball team, and Ellen served as a secretary in the Kansas athletics office. The pair eventually began dating and got married in 1986.

It already has been over three decades since the smitten duo shared their vows. Their love has remained the same, and their bond has grown stronger with each day passing. Furthermore, John Calipari’s wife calls him “The Roommate.” She also often shares pictures of him not helping around the house. One such instance was when Ellen shared a video of her hubby taking out the trash and referred to him as “Swaggy Roommate.”

There are several other posts in which the Calipari couple joke about each other. Furthermore, Mrs. Calipari once revealed how she and her beau don’t take each other too seriously, and Instagram has become her way of giving fans a glimpse into their family life. What’s best than a pair fooling around each other and supporting each other!

Has Welcomed Three Kids With Her Husband

As mentioned earlier, it has been several years since the coach and his partner exchanged the vows. In all these decades of sharing a blissful marital life, the couple has welcomed three kids together. John Calipari’s wife became a mother for the first time with the birth of their daughter Erin Calipari.

Ellen and John Calipari’s daughter played basketball at the University of Massachusetts. She then received her doctorate in neuropharmacology from Wake Forest University. She currently resides in New York City. Likewise, in November 1989. Ellen gave birth to their second child, Megan Calipari. She graduated with high honors from Cambridge School of Culinary Arts and currently works as a professional French pastry chef.

John Calipari’s son, Brad Calipari, is his youngest child with his spouse. He played point guard for his dad on the 2016-17 Kentucky team.

The Calipari family seems to be having a wonderful time together. Furthermore, Ellen herself uploads a number of pictures and videos of her kids and husband.

John has established himself as a successful basketball coach. While his hobby is coaching, and he remains most of the time in the field, John Calipari’s wife has different interests. In an interview, she shared she sews, does woodworking stuff, works in the yard, bakes, and even paints rooms in the house. Furthermore, the duo’s house’s basement is a room set up, especially for Ellen.

The room is the beautiful lady’s playroom, where she has kept a scroll saw, belt sander, jigsaw, router table, and table saw. She makes her own furniture, which looks like it came straight from a catalog. While her husband is away, Ellen seems to have found a way to engage herself.

John Is Her Second Husband

While Ellen is the first wife of the coach, he is her second husband. Before meeting John and marrying him, she shared a marital life with Nolan Cromwell. However, it is not known when the former couple tied the knot. Plus, the reason behind their separation has not been revealed yet.

Ellen Calipari’s ex-hubby is a former NFL player. He became an All-American at Kansas and then played for the LA Rams for ten years from 1977 to 1987. He has achieved significant success in his career.

Nonetheless, John Calipari’s wife seems to be doing well in her life. She lives comfortably with her husband and children. All in all, we hope Ellen continues living contently.