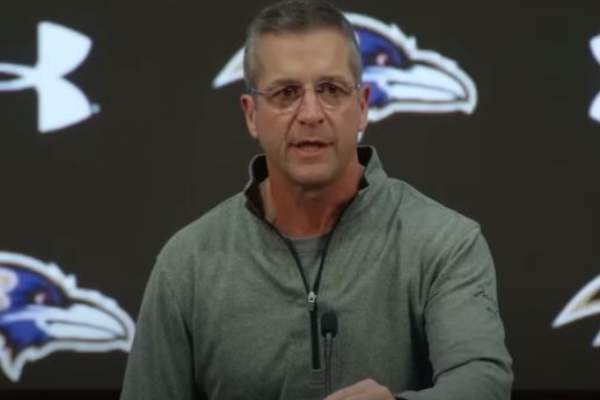 John Harbaugh, born John William Harbaugh, is not a new name in the American football arena. Since 1984, he has been serving behind the bench and is currently the head coach of the Baltimore Ravens. Having been in the sports world for many years, John has amassed considerable fortune and fame.

The majority of football fans who know Harbaugh are mostly interested in his personal life. Talking of which, he is joyfully married to Ingrid Harbaugh, who has been by his side even before he rose to fame. So, what is the reason behind their long-lasting marriage? Let’s find out in this article about John Harbaugh’s wife.

As mentioned earlier, John is happily married to Ingrid. The couple met at Western Michigan University in 1985. She was a student assistant in the baseball office at college, and he was a graduate assistant for his dad, Jack Harbaugh, who was coaching there.

In an interview, Ingrid Harbaugh’s husband recalled the exact moment they laid eyes on one another. While she was working in the baseball office, the copier broke, and he was there to fix it. When they met for the first time, John knew she was the one as he knew she had a good heart and appreciated the depth of her character and personality. The couple was both young and still figuring out where they stood on things.

Furthermore, John went to a jewelry store during a recruiting trip, where he picked out a ring. He put it on the trunk of a little stuffed elephant doll. Later, he gave it to Ingrid, and she saw the ring on its trunk. Eventually, the coach got down on one knee and proposed to her.

After dating for many years, the lovebirds tied the knot on July 12, 1991. As of 2022, it has been over three decades of their blissful marriage, and they are going stronger than ever.

In over thirty years of being married, the duo became proud parents of a child. John Harbaugh and his wife have welcomed their daughter, Alison Harbaugh. The duo’s baby girl has also caught a sports bug.

John Harbaugh’s daughter is also involved in sports. She played lacrosse at The Bryn Mawr School and was the team captain. At high school, she earned IAAM All-Conference Lacrosse honors in 2020, three varsity letters in basketball, and one varsity letter in tennis. She currently attends the University of Notre Dame, where she plays lacrosse. Similarly, the coach never holds back on praising his wife and kid.

For instance, while giving the keynote speech at the Stevenson University commencement, he talked about them. Allison Harbaugh’s hubby said that he has the greatest daughter and life partner in the history of the world, and he prayed that blessing to all as well.

John Harbaugh’s other half has been candid about her life as an NFL coach’s wife, which according to her, is stressful. He is away most of the time due to games, and many wonder what the pair do to make sure the spark in their marriage does not fade. Well, the Harbaugh couple has a pre-game ritual, which is sort of like a tradition.

As per Mrs. Harbaugh, as a part of their ritual, the couple signals each other before a game and blows each other a kiss. She revealed that if they missed it, they would lose. How cute is that, right?

Some celebrity wives prefer to keep themselves low-key even after entering the spotlight. However, John Harbaugh’s spouse seems to have embraced the limelight.

While John and his team, Raven were competing in the 2013 Super Bowl, Mrs. Harbaugh appeared in a behind-the-scenes look at their family life before the game. Furthermore, Ingrid Harbaugh’s daughter also accompanied her in the video.

In addition, in February 2012, Inngrid and her sister-in-law, Sarah Harbaugh teamed up to design and auction 25 Limited Edition Skinny Cow Cady Bowls. They raised money for the CureSearch for Children’s Cancer. Likewise, she also shared some of her best recipes of game day, including the “Grandma Miller” dip.

It included everything from Tabasco and olives to Worcestershire sauce. Similarly, the husband and wife took care of everyone’s check while at dinner at Jimmy’s Seafood Restaurant for a charity fundraiser. Although the coach never revealed the total cost of the bill, it has been revealed that it must be at least $2,000, and it was all Ingrid’s idea.

Another instance that shows the open heart nature of Ingrid was when she and her hubby funded to the Central Baltimore Partnership two meals every day for all critical-care and emergency workers at Union Memorial Hospital in April 2020. The duo was the largest donors.

All in all, John and Ingrid seem to be doing well, and their marriage seems to be going strong. We hope Ingrid continues doing good work and supporting her husband. We wish her blissful days ahead.