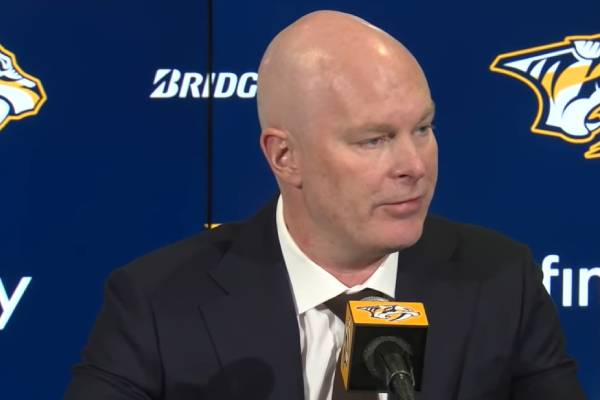 Ice Hockey is one of the most favored games and is popular around the world. People associated with it have accumulated immense fame and fortune in their careers. One such individual is John Hynes. He is a talented ice hockey coach who currently serves as the coach of the Nashville Predators of the NHL.

With his career stretching over two decades, he has established himself as one of the most skillful coaches in the league. Owing to his fame, his personal life has also gained the attention of the public. Thus, let’s get to know about John Hynes’ wife, Sarah Mikla Hynes, in today’s article.

Sarah Mikla Hynes is a former volleyball player and coach. She is from Hammond, Wisconsin, and completed her formal education there. She went to St. Croix Central High School and was actively involved in the school’s volleyball team. She graduated from the school in 1991. Furthermore, the former athlete also played for the volleyball club in, St. Paul.

As a talented student-athlete, Sarah earned a volleyball scholarship to the University of Pittsburgh. In addition to that, she won a four-year letter at the Pitt Panthers. Moreover, she became team captain and was named a senior Student-Athlete of Distinction.

Besides, the talented volleyball player earned the 1994 second-team All-Big East honors and was a two-time Academic All-Big East selection. She graduated from the university in 1996 and received a degree in movement science. Besides, John Hynes’ wife also has a master’s degree in teaching health and physical education from the same university. While earning her master’s degree, she also served as a graduated assistant volunteer volleyball coach.

Also Read: Who Is Master P’s Son, Lil Romeo Dating – He Has Already Welcomed A Kid With His Girlfriend

As aforementioned, Sarah was an active student-athlete passionate about playing volleyball. After her collegiate career, she became a teacher and coach at Oak Creek High School. Soon after, the University of Dayton hired her as their assistant coach. However, she returned to her hometown just after two years and became the director of volleyball operations at the University of Wisconsin.

That was when she met her future husband, John, who was serving the university as an assistant ice hockey coach for the Badgers under the head coach Mike Eaves. In an interview with Republican Eagle, the Wisconsin native revealed that she was working out early in the morning while John was putting the hockey players through their paces in the weight room.

Eventually, the couple tied the knot and moved to Michigan. John Hynes’ wife left her career and devoted herself to her family and kids.

The Hynes pair have not disclosed the exact date of their marriage. However, it is safe for us to say that they have been together for over two decades. They didn’t welcome their babies immediately after getting married. Instead, the lovebirds focused on their career for a few years. In 2009, Sarah’s husband became the coach of the Wilkes-Barre team. Their first child, Sophie Hynes, arrived around that time.

Afterward, the married duo welcomed two more adorable daughters. They are Julia Hynes and Anna Hynes. During the interview with Republican Eagle, John Hynes’ wife disclosed that none of their baby girls are interested in hockey. Instead, they have shown some in the volleyball.

John Hynes’ daughter, Sophie is currently in her sophomore year at Ravenwood High School. In addition, she was named the student of the week in mid-February 2022. She is a hardworking student with a passion for drawing and painting. During her free time, the eldest Hynes loves to play volleyball. Besides, after graduating from high school, the beloved girl plans to pursue becoming a nurse or physician’s assistant. On the other hand, the second Hynes is also into volleyball.

Nonetheless, John Hynes’ wife is a devoted wife and mother. In addition, she is a former volleyball professional. We wish the Hynes family a prosperous and wonderful life ahead.