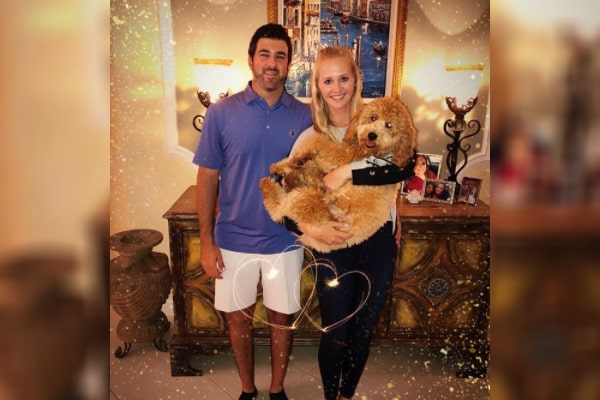 Jessica Korda is an American golfer who plays in the LPGA Tour and is a member of the U.S. Junior Solheim Cup. She further won the 2010 South Atlantic Amateur and finished T19 in her U.S. Open debut in 2008. Korda started her professional career in 2010.

Besides having a successful career for a decade, she is in a relationship with her partner, also a golf player, Johnny DelPrete. However, several questions arose regarding their relationship once Johnny was arrested for a sex sting. Therefore, let’s talk about the couple’s relationship and the impact of Jessica Korda’s boyfriend’s arrest made in their courtship.

If you are a golf enthusiast, you are indeed familiar with the name Jessica Korda and might even have a crush on her. But the fact that she’s dating a real estate mogul, Johnny DelPrete, might crush your crushing heart.

Jessica Korda’s boyfriend, Johnny Delprete, is a tall man with excellent build and has made his name in the real estate world. Furthermore, the University of Mississippi graduate, Johnny, majored in business administration in 2010. He currently works for the Net Seekers International as a real estate agent since September 2020.

Before that, Korda’s partner worked for Illustrate Properties Real Estate for two years from 2018. Moreover, before jumping into the real estate world, Johnny was a professional golf player. He played for six years from 2011 until May 2017.

Although Jessica Korda’s love interest was a sports personality, he prefers to keep his life confidential. Hence, we do not know much about his whereabouts.

The Korda-DelPrete Couple Has Been Thriving For Ages

Sadly, both Jessica Korda and Johnny Delprete have been dating for quite some time in secret. Furthermore, Petr Korda‘s daughter, Jessica, reportedly fired her caddie in the middle of a golf round and replaced him with her boyfriend, DelPrete, back in 2013.

Hence, the love birds might have started dating ever since then. Although they have maintained privacy, they have faced high-tides together and have come this far.

Jessica doesn’t upload their pictures anymore, but she used to upload many photos with cute captions. Although their online courtship has vanished and Korda’s boyfriend has kept his Instagram account private, they do share a dog.

The couple’s significant change occurred after a controversial arrest of Korda’s partner in a sex sting. Let’s go more in-depth on DelPrete’s arrest and their current relationship.

Former professional golfer and Korda’s longtime boyfriend, Johnny DelPrete, was arrested as a part of the human trafficking investigation in Stuart, Fla, in 2019. The arrest occurred after a hidden camera captured him receiving a sex act.

According to online booking records from the Martin County Sheriffs’s Office, he was arrested at Bridge Foot Massage and Spa in Hobe Sound on a charge of soliciting prostitution.

Jessica Korda’s boyfriend, Johnny, was released on a $2,500 bond. Furthermore, Jessica didn’t comment on her boyfriend’s arrest; neither did he make any comments.

Although the arrest caused severe speculations regarding Korda-DelPrete’s relationship, they have not opened up about their relationship.

Jessica Korda has not posted any new pictures with her boyfriend Johnny DelPrete. She never spoke up about Johnny’s arrest and has yet to confirm her relationship status.

Moreover, Jessica is focused on her golfing career and recently participated in the 2020 Tokyo Olympics. While she could not win any medal during the event, her sibling, Nelly Korda, won the gold. And Korda was the first one to congratulate her little sister for her win.

As for her personal life, whether Jessica and Johnny are together or not is unknown. But we hope both of them find happiness in their life.