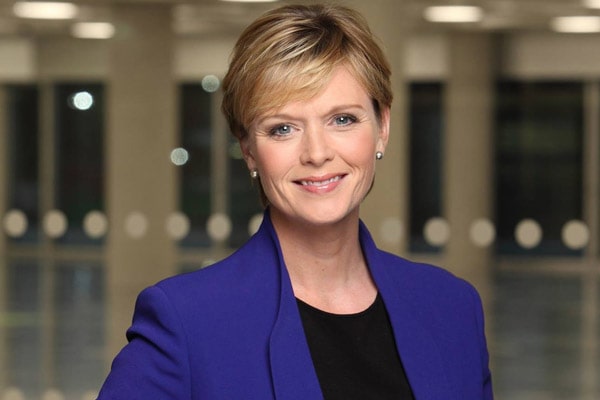 Julie Anne Etchingham, famous with the name Julie Etchingham, is an English journalist who is currently working as a television newsreader with ITV News. After graduating from Newnham College, Cambridge, Julie began her journalism career as a trainee on the BBC. Some months later, Etchingham became the presenter of the children’s new program Newsround in 1994. Following that, Julie also worked in Sky News as a presenter of Five News.

The news announcer of ITV News Channel, Julie Etchingham, took the wedding vows with her long-time boyfriend, Nick Gardner, in 1997 at Leicester, UK. The pair wed in a private ceremony attended by some of their close friends and family members.

According to Express magazine, Julie Etchingham met her forever love, Nick Gardner, while working on the BBC children’s show. At that time, Julie Etchingham’s husband, Nick, worked on the program as a producer. The lovebirds fell for each other and dated for almost three years and married in 1997.

The married couple, Julie and Nick, seem to be happy and contented with their marital life. There are no rumors of Julie having any sorts of marital issues with her spouse, Nick Gardner, to date.

The privacy loving husband-wife duo, Julie and Nick, are parents to two gorgeous kids together. They have two sons. One of Julie’s sons’ names is James Gardner, as for the other kid’s name is yet to be revealed to the public.

Although Julie never mentions her son’s names before the media, she often shares photos of them on her Instagram page. She calls her children number one and two, making sure to hide their names from her followers. It seems like Julie and Nick prefer their sons to enjoy their life like other ordinary kids without getting affected by their mother’s fame.

Though Nick never appears along with his sons in public places, he might be having a tremendous father-son relationship behind the camera.

Julie Etchingham’s husband, Nick Gardner, seems to be a strictly privacy loving person. Gardner is not available on any social media page like Facebook, Instagram, and Twitter. Although his wife, Julie, is active on Instagram and Twitter, it’s just filled with posts related to her profession, sons, and their beloved dog, Willy. There are no single photos of Nick available on the media.

Once during the Christmas of 2019, it seems like Nick was seriously ill. His wife, Julie, had tweeted thanking the lovely staff and paramedics of NHS and NNUH for taking care of her husband. Besides, there are no updates about Julie Etchingham’s partner, Nick Gardner.

Nevertheless, Julie’s tweets and extreme concern for her spouse’s privacy shows that she loves him unconditionally. Moreover, she probably does not want her popularity to create unnecessary dramas in her husband’s life. However, we still hope Nick Gardner shows himself off in the limelight every once in a while so that Julie’s fans can get updates about him.