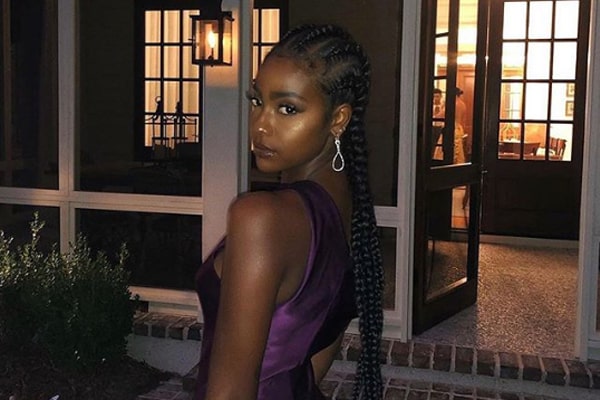 Justine Skye is a bright girl who went through a number of tumultuous relationships. Image Source: Skye's Instagram.

Therefore, today we will be discussing Justine Skye and Wizkid’s relationship. Furthermore, we will be looking into the rapper’s past relationship as well.

The gorgeous singer, Justine Skye, and Wizkid’s relationship rumors started in 2016 based on their indirect tweets. Furthermore, they were seen on music fests together.

The pair posted a couple of pictures together. Likewise, Justin Skye’s ex-boyfriend, Wizkid, wished her on her birthday despite being unable to attend the birthday. Similarly, they exclusively came out as a couple in September 2016 when Wizkid uploaded a picture of themselves on Instagram.

A few months into the relationship, they sparked break up rumors as they stopped sharing pictures. Ironic! However, Wizkid’s ex-girlfriend cleared the rumor as she uploaded photos of them hanging out. Likewise, Wizkid also tweeted calling her ‘Baby gal’ and confirming their forever.

Regrettably, NO! The former couple, Wizkid and Justine Skye are no more together. Although their relationship was short, it made a massive commotion throughout the media. She confirmed their breakup after she decided to release a series of tweets confronting her emotions.

With their split, Wizkid’s ex-girlfriend also shared her disappointment about the relationship. She exclusively expressed her regrets claiming she is unable to trust any men in the future.

Although Wizkid featured his ex-girlfriend in his music video, things eventually went downhill. It further led to Justine Skye’s regrets of landing on someone who couldn’t appreciate her at all and threw a dense shade on him.

As of now, both Wizkid and Justine Skye are living their individual life happily.

Well, it seems like Justin Skye had struggled to find the one who would appreciate her presence. Before Nigerian singer, Wizkid, rapper Justine Skye was in a relationship with American singer, rapper, Sheck Wes.

Justine Skye’s relationship with Sheck was a colossal mess. She had a very depressing experience while being in a relationship with Shack. When the pair called it quits, it did not make a fuss. However, Skye’s latter tweets/Insta posts shook the world.

The Roc Nation artist, Justin Skye, revealed that their relationship wasn’t the most healthy. She also accused him of physical abuse and filed complaints against him. Her tweets and Instagram posts reflected her abusive relationship and her mental/physical state during their companionship.

Skye’s ex-boyfriend, Sheck, remained silent for a long time and finally responded to the allegations. The rapper claimed that he was not the type of person who would beat women. Hence, he denied the allegations.

Responding to Wes’s tweets, Skye released footage that showed jumping over her crib’s fence to attack her. She also responded with several other evidence to prove her claims.

Skye was granted a restraining order against Sheck Wes, but the L.A. District Attorney decided not to pursue any further action.

Besides Nigerian singer, Wizkid and American rapper, Shack Wes, she has dated a few more times. Amongst a few name is Kylie Jenner‘s baby daddy, Travis Scott. Reportedly, the pair dated while Travis and Kylie were still together. This news ruined Kylie and Justine’s friendship.

Furthermore, she also dated a famous NBA player, Justise Winslow. Their relationship lasted shortly, which made Collide singer, Justine believe that she is cursed when it comes to relationships.