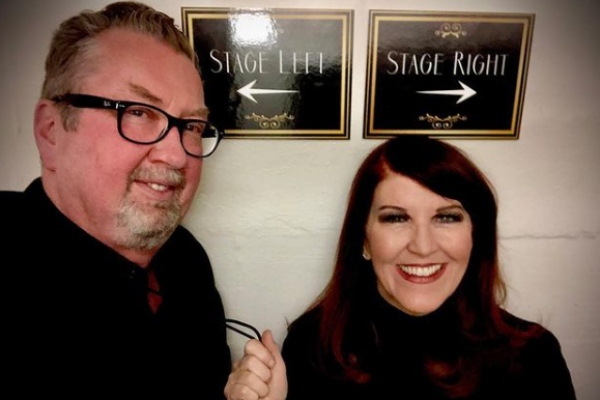 Flannery's fans often have one question in their mind, "Is Chris, Kate's husband?" Image source: Instagram/soulstealer007.

Kate Flannery is an American actress best known for her work in the popular television series The Office. Kate has been in the acting industry for more than three decades. Her career has seen a start out from theatre to play on one of the greatest television series ever made. Kate’s success is all thanks to her extreme dedication and passion for her job. The fifty-six-year-old has won screen actors’ Guild Award for outstanding performance by an ensemble in a comedy series nomination, which is no small feat.

While Kate’s professional has been really eventful, her personal life has not seen that much glory. She is very secretive about her personal life and does not like to share much with the media. Kate Flannery has been in a relationship with photographer Chris Haston for more than a decade, but the couple has not shared much about their relationship. Many fans have one question in their minds,” Is Chris Haston Kate Flannery’s husband?”.

Keeping that in mind, we have made a short article on Kate Flannery’s boyfriend, Chris Haston. So let’s stick to the very end to know more about him.

Chris Haston currently serves as a photographer for NBC. He has served as a still-photographer for more than three decades for the media house and recently worked on the TV series called Weakest Link. He has also worked on other popular NBC shows such as Will & Grace and The Office.

Chris’s career is still going pretty strong and he is not slowing down. With support from family and loved ones, he has everything needed for him to succeed.

Kate And Chris Met During The Shooting Of The Office

The lovely pair, Kate Flannery and Chris Haston apparently met during the shooting of the popular television series The Office. Haston worked as a stills photographer back in the day. According to IMDb, he even appeared on the finale episode of the series as a photographer. The couple probably met during one of those photoshoots. Flannery and Haston are still going strong to this day. They are regularly seen together in public places and are showing no signs of hiccups.

Kate Flannery’s boyfriend Chris Haston currently works as a photographer for NBC while Flannery is continuing her acting career. In an interview with Closer Weekly, Kate Flannery revealed that she had not been in love before meeting Chris. Her exact words were:

“I think being older is a gift and you know, I’m a late bloomer in love too.”

Flannery was in her early forties when she met Chris, so she thinks being late is actually better. Let’s hope this couple will continue to hold each other’s hands for many more years to come.

As soon as the couple started posting pictures of each other, fans were already eager to know about Flannery’s and Haston’s relationship. There have been numerous rumors about Haston being Flannery’s husband. Even her IMDb profile mentions that the couple was married and divorced in 2016. But that is not the case as they were photographed in many public events.

Flannery refers to Chris as her boyfriend on social media, which clarifies the confusion regarding their relationship status. Haston even describes himself as ‘The main man of Kate Flannery‘ on his Twitter bio. Even though this does not prove that they are not married, but it points more towards their long-term partnership rather than a marriage.

Kate Flannery And Chris Haston: Any Plans On Marriage?

Flannery and Haston have been together for fourteen years now, but they have not shown any signs of a possible marriage. Kate Flannery recently made an appearance in the popular reality show Dancing with the Stars as a special guest. During her appearance, Kate Flannery’s rumored husband Haston made sure to come to every show and sat in the front row. Flannery definitely appreciated this and was praising Chris for making an effort. He even traveled with Flannery’s dad that definitely helped their bond.

There are certainly many hints that Flannery and Haston should be married, but the couple has surprisingly chosen just the opposite due to unknown reasons.

Kate Flannery’s boyfriend Chris definitely seems like a husband material and a gentleman. The couple has a long way to go and build an even stronger bond with each other before getting hitched. If they decide to marry, we will certainly know about it. Until then, let’s hold our seats and be patient.