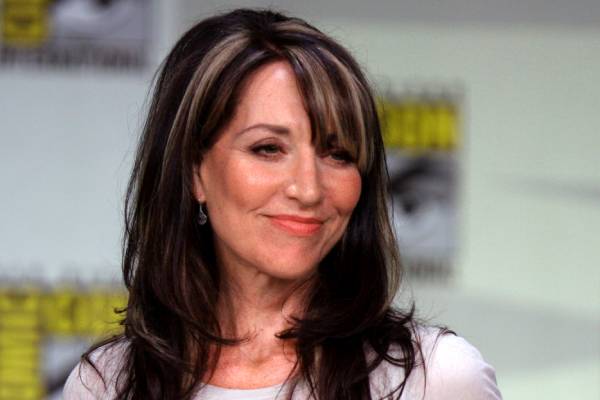 Katey Sagal has been actively working in the entertainment industry for 50 years. The talented 68-year-old is a popular American actress and singer-songwriter. She has worked in some of the biggest TV series such as Married… with Children, Sons of Anarchy, Shameless, and The Conners.

Furthermore, Katey has won the Golden Globe awards for Best Actress Television Series Drama for her role in Sons of Anarchy. Besides acting, Sagal is a singer and songwriter too. She released her first solo album, Well… in 1994.  She even contributed to Sons of Anarchy’s music.

Living in a glamourous showbiz industry from a young age, Katey has been married four times. She is currently married to Kurt Sutter, having tied the knot in 2004. So who are Katey Sagal’s previous husbands? How long was she married to her ex-spouses?

Hence, in this article, let’s get to know about all of Katey Sagal’s husbands.

Freddie Beckmeier Was The First Husband Of Katey Sagal

Katey Sagal and Freddie Beckmeier got married in 1977. They were married for four years until 1981 before parting ways. He was a founding member of the band Beckmeier Brothers with his brother Stephen Beckmeier. Furthermore, Freddie was also a bassist in Paul Butterfield Blues Band.

Before marrying Freddie, Katey was in a relationship with KISS founder Gene Simmons. When Freddie proposed to her for marriage, she told Gene about the proposal. Katey even asked Gene to ask her for marriage or else she would marry Freddie. Simmons laughed it off and Sagal then married Freddie Beckmeier.

After her divorce from first marriage, Kate Sagal married Fred Lombardo in 1986. Fred was a musician and actor and worked in a movie called Love Is A Gun in 1994.

Unfortunately. Katey’s and Fred’s marriage did not last long. The couple were only married for 3 years and separated in 1989. Sagal was working her way up in the movie industry during her marriage with Fred Lombardo. It seems like the Sons of Anarchy star’s rising fame made a big effect on her second marriage.

Just after a year from her separation from Fred Lombardo, Katey started dating Jack White in 1990. Katey Sagal’s ex-husband was a drummer at a rock band called Steppenwolf from 1977 to 1980. He was also a hockey advisor and acted in some movies like The Mighty Ducks, Guiding Light.

The pair dated for three years before getting married in November 1993. Katey and Jack were married from 1993 to 2000 before filing for divorce. During their marital span of seven years, the duo gave birth to three children (two daughters and a son) Sarah Grace White, Ruby Jean White, and Jackson James White.

Despite three failed marriages, Katey wasn’t reluctant on getting married a fourth time. Well, she might be happy with her decision. The actress is currently married to American actor and director Kurt Sutter.

Kurt has been Katey Sagal’s husband since 2004 and the love birds have worked together in Sons of Anarchy.

The couple met through a mutual friend and it all started when Kurt asked Katey out for a coffee. After dating for a while, the lovely duo got married in a private ceremony in 2000 in Los Angeles California.

The pair have a daughter, Esme Loise Sutter together whom they welcomed through surrogacy. Katey mentioned that she was too old to carry a child and thought it was the best option.

Nevertheless, the Sons of Anarchy star seems to be very happy with her current marriage. Katey Sagal’s husband might be taking good care of their family. We wish them all the best for their future.