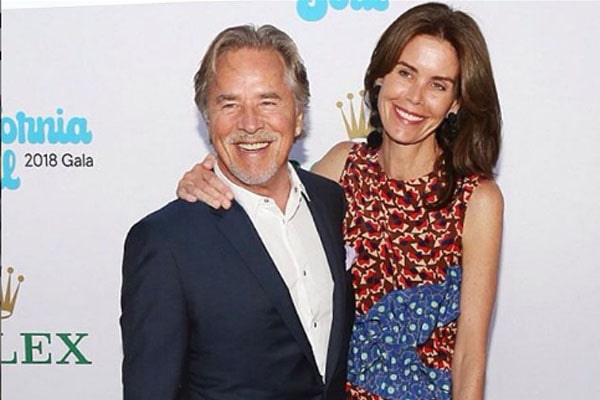 Kelley Phleger is Don Johnson's wife and they have been married together for more than two decades. Image Source: donjohnson/Instagram.

Kelly Pleger has had a marital relationship of over two decades with her husband, Don Johnson. The married couple is blessed with three lovely children. The 51-year-old has two sons named Deacon Johnson, Jasper Johnson, and a daughter named Grace Johnson.

The famous Casanova finally tied a knot with his now-wife Kelley Phleger in 1999. The lovely pair of Kelly Phleger and Don Johnson dated for two years before their wedding.

The lovely couple, Kelley Phleger and her husband, Don Johnson have been married more more than two decades. It’s hard to believe how they have been together in their life journey while others can’t stop divorcing each other. Kelley and Don are so happy together and cannot imagine their life without one another.

The love birds have set up an impeccable example of marriage and relationships. Kelley and Don are undoubtedly living a charmed life. Their happiness rose more after they became parents to three lovely kids.

Kelley gave birth to three children- two sons and a daughter, from her 20 years of marriage. The eldest daughter is Atherton Grace Johnson and her two sons are Jasper Breckinridge Johnson and Deacon Johnson.

Born on Dec 29, 1999, Kelley Phleger’s daughter, Grace Johnson is enjoying and cherishing the moments of the teen. The 18-year-old Grace Johnson keeps her private life low-key but is active in social media like Instagram. She uploads photos of other stuff rather than her own. The blonde hair perfectly fits her gleaming face.

Going through her Instagram account, she pursued a modeling career and has over 37.8k followers on Instagram too. She is thriving as a gorgeous model and will probably reserve a seat in the fashion and modeling area in the coming days.

Don supports his son, Jasper’s passion for basketball, and is there to support him in every match. Jasper represented Santa Barbara in Channel League Action. He was born on June 6, 2002.

Well, Kelley Phleger’s son, Jasper does not seem to be a fan of the spotlight and probably has no interest at all. He also has an Instagram account but it’s in private mode at the moment. Perhaps he is the kind of person who loves privacy and secrecy.

The youngest son of Kelley Phleger, Deacon Johnson was born on April 29, 2006. He is an active jolly boy who shows immense love for animals and also video games. Like any normal kid, Kelley Phleger’s 14-year-old son, Deacon loves toys and stuff.

The happy family of five pursue a lavish lifestyle provided by Don’s colossal net worth of $40 million and believes in spending quality time together and is often spotted vacationing.

Before forming a bond with Don, Kelley Phleger was in a long-term relationship with the former San Francisco mayor, Gavin Newsom. The ex-couple got engaged in 1992 but eventually broke up in the year 1997 after Kelly met the bad-boy actor, Don Johnson. Gavin Newsom belongs to an old, privileged family and is the 42nd mayor of San Francisco.

Besides that, Don Johnson, the star of “Miami Vice,” had two children from his previous wives- Dakota Johnson and Jesse Johnson. Dakota is famous for her lead role in Fifty Shades of Grey. Nevertheless, the two love birds are very fortunate that they found love and succeeded at taking their relationship for more than two decades.