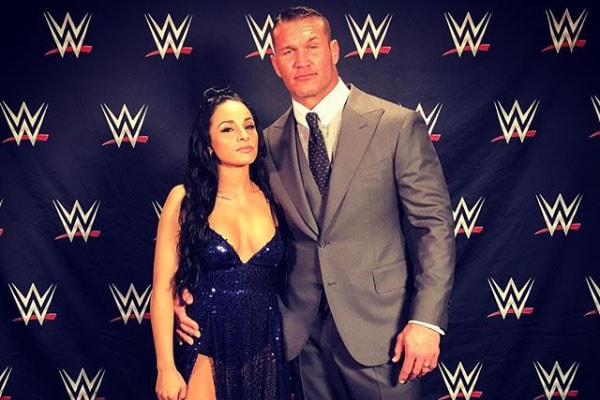 WWE Superstar Randy Orton married his wife Kim Marie Kessler on the 14th of November, 2015. Together the pair has a lovely daughter named Brooklyn Rose Orton.

The gorgeous Kim Marie Kessler is the second wife of Randy Orton. Kim’s husband Randy was previously married to Samantha Speno. Randy Orton and his ex-wife Samantha also have a lovely daughter named Alanna Marie Orton. Even after the divorce, Randy is in good terms with his former wife, Samantha.

The Viper, Randy Oton met his better half, Kim Marie Kessler shortly after his divorce. After dating for some time, Kim and Randy got engaged in the July of 2015 at Bora Bora while they were there for a vacation. Randy Orton romantically proposed his wife Kim at a candlelit dinner. When Kim accepted the proposal of her husband Randy, she tweeted a photo of her fingers flaunting the engagement ring.

He asked and I said YES ??❤ @RandyOrton pic.twitter.com/zNTrlp9OQ1

And just after a couple of months, Randy Orton and Kim Marie Kessler tied their knot in Las Vegas on November 14, 2015.

Looking at the lovely couple of Randy and his partner Kim we can see how much love they have got for one another. Before dating, Randy Orton’s wife Kim Marie Kessler was a big fan of his wrestling. It is a dream of many people to fall in love and marry their celebrity crushes, and in the case of Kim Kessler, it did come true.

Randy Orton’s wife Kim Kessler is a proud mother of five. As stated earlier, Kim and Randy just have a daughter named Brooklyn Rose, she has got three handsome sons named Michael, Rob and Anthony from her previous marriage, plus she also looks after Randy Orton’s daughter Alanna. Kim is the perfect wife the 38-year-old wrestler Randy Orton could wish for.

Randy Orton is also very much close with all of the children. All in all, Kim Marie Kessler is happily married to Randy Orton and is living a blissful life with her five lovely children. She also has got a pet dog named Spike which they found while they were on a hike in Bora Bora.