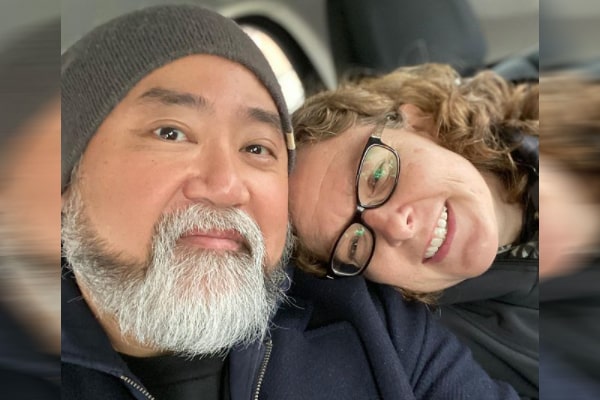 Korean Canadian actor Paul Sun-Hyung Lee is best known for his roles as Randy Ko in the soap opera Train 48 as well as Kim Convenience‘s patriarch Appa. Paul was nominated twice for the Dora Mavor Moore Award and won the Best Leading Actor award in the Canadian Screen Awards in 2017 and 2018.

Besides having a thriving career, Paul Sun-Hyung Lee is also a doting father of two sons and a loving husband to Anna Lee. The pair exchanged vows in 2001 and have been enjoying their marital life ever since. Therefore, here is everything you need to know about Paul Sun-Hyung Lee’s wife, Anna.

Kim’s Convenience’s Paul Sun-Hyung Lee is a phenomenal actor known for his films and hosting television shows. However, he is in a blissful marital life with his wife, Anna Lee. Well, fame and privacy are like two poles of Earth. Thus, maintaining privacy is very painful and utmost impossible for celebrity stars.

But, the Kim Convenience actor has managed to keep much of his life away from the spotlight. Especially, Paul Sun-Hyung Lee’s wife, Anna Lee, a Sign Language Interpreter, loves her privacy. She tries to keep her whereabouts and professional career away from social media. Moreover, Lee’s Instagram account is also private, but she seems active on the platform. While her partner, Paul, garners 76k followers, Anna has only 200+ followers.

Furthermore, in a rare interview with TRNTO, Paul Sun-Hyung Lee’s partner revealed she worked as a sign language interpreter for the hard of hearing and deaf. She used to work full-time, while Paul was a stay-at-home dad for their two boys. But since he got busier, Anna manages to fit her schedule to the family’s needs.

Paul Sun-Hyung Lee’s wife, Anna, further revealed that she is an avid collector of movies. Well, the collection can be seen in one of Paul’s Instagram posts when they tried to swap their living hall and dining room. It’s massive. She also loves watching the ice hockey team, Toronto Maple Leaf’s games as they have improved massively.

She further noted that she has gotten into replica prop building with her children lately. Therefore, despite remaining grounded, Anna seems to be a cool mom and wife who rarely interacts with the media.

Aforementioned, Paul and his partner are married since 2001. But, did you know they would’ve never met if Anna had decided not to join her friends?

While talking to Trnto, Anna revealed that they met through a mutual friend. She further continued that she was with her friends from college while Paul was out at a bar with his friend. Moreover. While Paul called to know what their mutual friends were doing the evening, Anna almost didn’t join them at the bar.

Thankfully, Paul Lee and Anna Lee met, made one another laugh, and exchanged numbers. Moreover, their first official date took them all over Toronto, dining, and drinking. Furthermore, Anna further said that there were lots of walking, talking, and laughing.

During the courtship, Paul introduced his partner to widescreen movies, video games, and sci-fi. The pair had fun watching movies and playing games in her Kensington Market basement apartment. And after many dates, laughter, and movies, the couple walked down the aisle in 2001.

As stated earlier, Paul Sun-Hyung Lee’s wife, Anna Lee, is a private person who prefers to keep her marriage away from media scrutiny. However, she shared a few essential fragments of her relationship, including the story about their proposal.

Kim’s Convenience’s Paul Sun-Hyung Lee proposed to his sweetheart on December 31, 1999, mere hours before the year 2000, was about to hit! According to Paul, his then-girlfriend was very ill, but it was a romantic night. After two years of engagement, the Lee couple exchanged vows on August 25, 2001.

They flew to Orlando, Florida, for their honeymoon and welcomed two adorable sons afterward. Moreover, Paul is not scared to share his love with the world. He is also grateful to his wife, who has been keeping up with his celebrity life without being overwhelmed. While talking to Trnto, Paul revealed that the key behind their relationship was mutual respect, unconditional love, support, honesty, and clear communication.

Paul also shares their photos on Instagram, thanking his partner, Anna, to help him remain humble as ever and maintain the spark in their marriage even after two decades. Well, Anna and Paul are happy to have one another, but their bundle of joys, Noah Lee and Miles Lee, double their merriment.

Aforementioned, Paul Sun-Hyung Lee and Anna Lee are blissfully married since 2001 and have welcomed two sons, Noah and Miles.

There isn’t much information about Paul Sun-Hyung’s sons on the internet, but they appear on his Instagram now and then. Furthermore, both Noah and Miles are athletic and prefers baseball.

In one of Paul’s posts, he talked about being proud of his babies and shared his pleasure to help guide his children during this pandemic. He and Anna are very close to their sons and maintain a friendly relationship with them.

Therefore, Paul Sun-Hyung Lee’s wife, Anna Lee, is exceptionally private and rarely shares details about various life events. However, she is the rock of Paul’s life, and let’s hope we get to see her more in the coming days.