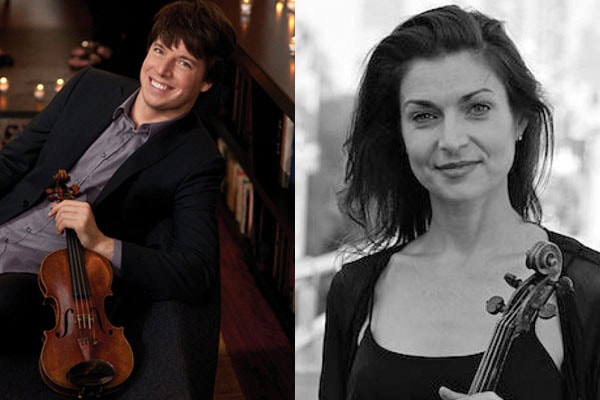 The Grammy award-winning violinist Joshua David Bell’s ex-partner is Lisa Matricardi and is a violinist herself. The duo was in a relationship since 1992. After spending nearly 7 years together, the couple decided to go their separate ways in 1999.

Joshua Bell’s ex-beau, Lisa Matricardi is a New York-based professional Violinist. The ex-couple met when Lisa was playing as a sub in the Baltimore Symphony Orchestra in the early 1990s. Sharing the same musical background definitely did play a role in bringing the duo together. Thus they started dating in 1992. 7 years later, however, the pair decided to split up mutually in good terms.

Lisa Matricardi plays the violin for the song Quintet for Basset Clarinet and Strings in A major, K. 581 – Allegro,  at St. Malachy’s in The Actors’ Chapel.

Although the couple split in 1999, they still remained friends. Eventually, they decided to enter into parenthood, though not being bound to each other through any relationship. In 2007, Lisa gave birth to Joshua’s first son. They named him Josef Matricardi Bell, after Joshua’s former teacher and Russian Violinist, Josef Gingold.

In 2010, Lisa Matricardi gave birth to twin boys – Samuel and Benjamin Bell. The boys are nearly 9. The former couples live in New York separately but are very close to each other. Their older son, Josef, is interested in music like his parents and plays the cello. Josef, six at the time, played the Mozart Romance with Joshua in his father’s apartment when he had a benefit for Josef’s school. Other than that, the sons live a pretty private life. We can assume they go to a secondary school in New York.

The reason Lisa and Joshua broke up was because of his nomadic lifestyle. Joshua said in an interview that Lisa didn’t think he was husband material. His hectic schedule doesn’t allow him to spend much time with the boys as he’d like but doesn’t miss out on a chance when there is one. Joshua is currently dating his new partner Larisa Martinez.