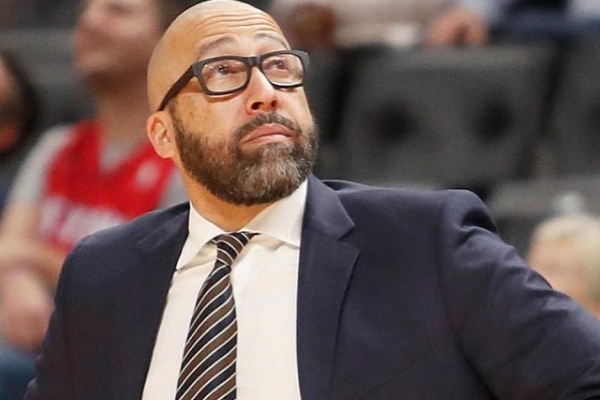 David Fizdale is an American professional basketball coach who has served in the NBA for more than a decade. The 46-year-old has been involved at various teams since his first stint in the early 2000s. David is a two-time NBA champion as a coach, while his playing career was not as prolific as his coaching career.

Having spent almost two decades at NBA, David has remained an assistant coach most of his life. But it was changed after he was picked up by Memphis Grizzlies as their head coach for the 2016 season. David’s career has seen a lot of ups and downs, so let’s have a look at the teams coached by this basketball genius.

After spending a few years at the college level basketball, David Fizdale made his way into the NBA as an assistant coach of Golden State Warriors. During his short run with the Warriors, Fizdale gained some experience under the head coach Eric Musselman. As the warriors were not a force like they are now, the team finished that season with a 37–45 record.

After spending the 2003/4 season with the Warriors, Fizdale’s next move was to Atlanta Hawks.

David Fizdale spent a lot more time with the NBA team Atlanta Hawks than he did at the Golden State. Fizdale was hired as the assistant coach by Atalanta Hawks under the head coach Mike Woodson. His first season at Atlanta came out poorer than anyone would have anticipated. Atlanta finished the 2004/5 season with Hawks losing 32 of their final 35 games, posting 13 and 14-game losing streaks respectively on their way to finishing with a league-worst record at 13–69.

David’s last three seasons at Hawks improved as Atalanta finished with a record 26–56, 26–56, and 37–45. During Fizdale’s last season at Atlanta, the team finally qualified for the playoff but lost to Boston Celtics 3-4 in a seven-game thriller. Overall David gained an important experience and saw him shine later on.

ALSO READ: Look At All Of Alvin Gentry’s Teams He Has Coached

Back To Back Titles With Miami Heat

Having gained a lot of experience from previous jobs, it was time for David to finally sign. David was hired by the Miami Heat in 2008, where he spent nearly a decade as the assistant coach. The Heats had won the division title the previous year, but Fizdale’s first season with them was not as expected. After a continuous struggle, Heats were back in the business after signing a young prospect LeBron James from Cleveland Cavaliers in 2010. The Heat was on the verge of rebuilding and saw a wonderful side with key players like Dwayne Wade and Chris Bosh, who made the big three along with LeBron in the golden generation.

Under the head coach Erik Spoelstra, David Fizdale won back to back titles in 2012 and 2013. The heats had a record of 46–20 and 66-16 in the two seasons they won the title. David was also a key part of the team; after all, he was the assistant coach and was the man behind the glory. David’s time at Miami made him popular in the coaching world, and various teams started to approach him. David Stayed with Miami until 2016 before leaving for Memphis.

First Time As The Head Coach

David Fizdale’s time to finally take on the shoes of a head coach came in 2016 after he was hired by Memphis Grizzlies as the head coach. During his first season at Memphis, he led the team to a 43–39 record that was a slight improvement from their last season, which had a record of 42-40. Memphis went on to reach the playoffs under Fizdale’s first season. But they lost to San Antonio Spurs for the second time in two seasons.


The 17/18 season was quite distressing for David as the team had a 7–12 start, including eight consecutive losses. David was fired after the heavy loss and a publicized criticisms for benching Marc Gasol in the fourth quarter.

After an unsuccessful season at Memphis, David was hired by New York Knicks on a four-year deal. But the things did not turn out as expected for the two-time NBA champion. Following a 4-18 start to their season in 2018/19, Fizdale was fired by the Knicks without even completing a year of his four-year deal.

David has not been in the coaching scene since his departure from the Knicks. But we can expect him to come back stronger than ever and get back to his glory days.