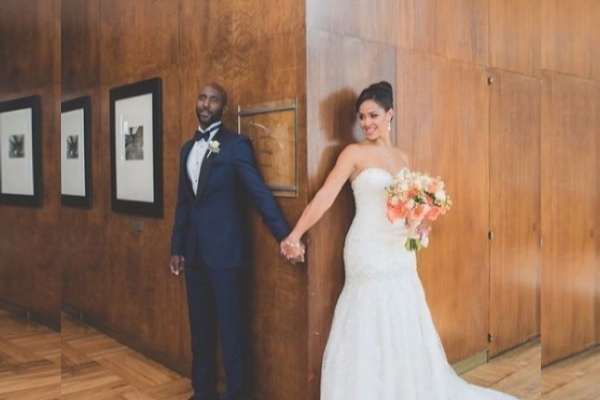 Lloyd Daniel Pierce is a professional American basketball coach who served as the head coach of the Atlanta Hawks of the National Basketball Association (NBA). He was fired by the Hawks on March 1, 2021, after poor performances from the team. This guy has been a basketball coach for 18 years and has served many NBA teams like the Philadelphia 76ers, Memphis Grizzlies, Cleveland Cavaliers, and Golden State Warriors.

During his 18 years long coaching career, various changes occurred in his personal life, and one of the most significant ones is his wedding. Today we will be talking about one of the most integral parts of his life, his wife, Melissa Ghoston, and their sunshine themed wedding.

How Did The Couple First Meet?

Lloyd and his current wife Melissa met through mutual friends at a steakhouse bar in Cleveland, OH. As natural as it may sound, they started talking to each other, but sparks did not fly immediately. They lived in Cleveland, which is a small town, so they frequently crossed paths. Six months after their first meeting, they started hanging out together a lot more and eventually started dating.

Lloyd’s job required frequent shifting and traveling, so they had to be in a long-distance relationship for a very long time. Nearly after four years of dating, Lloyd Pierce’s wife Melissa took a big step and moved to Memphis to be with him. After a year, Lloyd’s career brought him to Philadelphia, the hometown of Melissa, where they got settled.

After 6 years of dating, Lloyd finally proposed to Melissa in 2014. It was one of the hottest and stickiest days of summer, and Lloyd insisted on going out instead of relaxing at home. After going to one of Lloyd Pierce’s wife Melissa’s favorite parks, they headed to her childhood home. Lloyd never visited the place, even though Melissa had an emotional attachment to it. So we can understand that Lloyd had it all planned since the very beginning.

Lloyd casually asked Rachel Ghoston, Melissa’s sister, to take a picture of them in front of the house. And within a blink of an eye, he was down on his knees. Though she had been speculating and preparing for it for the past six years, Melissa could not react. Finally, she said YES!!!. Lloyd had already flown to buffalo that very morning to take the blessing of Melissa’s father. This proposal was well thought and well planned. Overall the luxurious places in the world, he chose Melissa’s childhood home. The proposal was thoughtful and precious.

After nearly one year of the proposal, Melissa Ghoston and Lloyd D. Pierce got married on August 14, 2015, at Cescaphe Event Group’s Vie- Philadelphia, PA. They exchanged their I dos at 5:30 pm. Lloyd Pierce’s wife Melissa wore a lace Allure gown accented with sparkling embellishments that shimmered all over but just in the right amount, and he wore a blueish suit. They invited around 200 families and friends to celebrate their wedding.

The sunshine-themed wedding also had an ‘unplugged ceremony,’ so the bride and the groom got to saw happy faces with tears and smiles instead of cameras and flashes. They also had a Sunset Soiree for all of the guests on the pre-wedding day.

Why Lloyd D. Pierce and Melissa J. Ghoston Had A Sunshine Themed Wedding?

Lloyd and his wife Melissa wed in a sunshine-themed wedding in Philadelphia. The reception capitalized on the lyrics, “you are my sunshine, my only sunshine, you make me happy when skies are gray.” However, the inspiration for a sunshine-themed wedding did not come from the song. The first nickname Lloyd had ever given to his then-girlfriend Melissa was “Sunshine”. Adding to that was Melissa’s obsession with the sky and sunsets made it an ideal theme for the couple.

The lovely couple went to Italy for their honeymoon. Today, Melissa and Lloyd are blessed with a daughter Maya Joy; and a new sunshine is on his/her way. We wish this couple a lifelong togetherness and a life full of happiness.