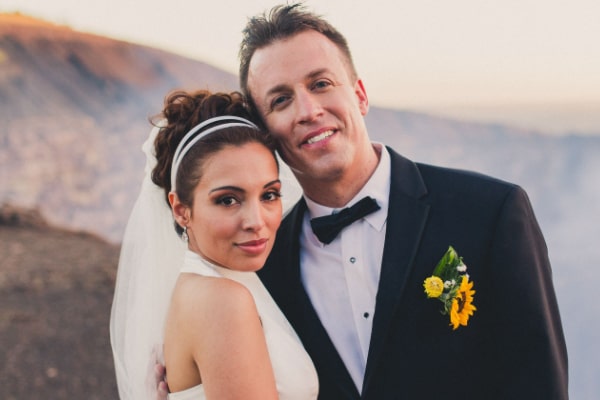 Reed Timmer, a well-known American meteorologist, and storm chaser was married to Maria Janeth Molina for a brief period of time. Molina is also a meteorologist who worked for the FOX News Channel.

Both the individuals were a perfect match for each other, especially for their interests. Their marriage may have only lasted for a couple of years, but they sure did spend an adventurous time together.

Below, let’s dig into Reed Timmer and Maria Molina‘s love life and get to know them better.

As mentioned above, the former lovebirds are both into meteorology. Timmer, born on 17th March 1980, starred on Discovery Channel’s reality television series; Storm Chasers and also appeared in the documentary film Tornado Glory.

The meteorology star became interested in weather at an early age and is part of the multiple storms chasing teams. He also created a couple of storm-chasing vehicles by modifying them with the required equipment.

On the other hand, Maria Molina is a Ph.D. holder from the Central Michigan University and previously worked for FOX. The 34-year-old is currently doing an Advanced Study Program (ASP) postdoctoral at the National Center for Atmospheric Research.

She is also a Certified Broadcast Meteorologist designated from the American Meteorologist Society and grew up in the Republic of Nicaragua.

Reed Timmer’s ex-wife Maria Molina met him for the first time in 2014. The former couple was assigned to cover a tornado in Mayflower, Arkansas, where the magic happened.

It was love at first sight at their very first encounter as they shared similar interests. They would eventually start dating shortly after they met in Arkansas.

The couple would unofficially get engaged the same year as the storm chaser had his friend capture his proposal with a tornado in the background.

Maria Molina and her ex-husband Reed Timmer would have an official engagement in March of 2015.

The most exciting factor of their engagement, other than it being a weather-themed event, was its underwater photoshoot. The shoot was handled by the professional underwater portrait photographer Adam Opris.

The shoot took place in the swimming pool of Biltmore Hotel, Miami, and the ex-partners struggled to get the perfect shot. The meteorologist even commented that the pair swallowed tons of water. He also stated that while the photo looks beautiful the process was very difficult.

Nevertheless, they did seem to had a lot of fun, didn’t they?

Wedding Near An Active Volcano

Reed Timmer and Maria Molina’s wedding was more weather-themed than their engagement. On December 23rd, 2015, the former couple got married in one of the most unusual fashions.

Their wedding ceremony was conducted on top of one of the most active volcanoes in the Western Hemisphere, the Masaya Volcano in Nicaragua. Regardless of the life-endangering risks, the event was a hit with a touch of fire and brimstone.

The entire ceremony showed the couple’s love for meteorology. As Molina is a native of Nicaragua, their wedding had the perfect and thrilling setting. Even a dust devil hit the ceremony as Reed’s soon-to-be wife was walking down the aisle.

Their Marriage Lasted Only For A Couple Of Years

Despite having such a unique engagement and wedding, Maria Molina and Reed Timmer’s marriage only lasted three years.

There are many reasons why the extreme weather lovers separated. One such reason was Reed Timmer’s love for storm chasing. According to his ex-wife, Reed was always chasing storms around rather than settling down.

The 41-year-old has a massive fan following for his daredevil adventures, due to which he is always pushing himself to extreme weather areas. Their marriage may have had an exciting buildup but fell short of lasting long.

In their short married life, the couple was the parents of two dogs, Gizmo and Cumulus.

Maria Molina’s ex-husband Reed Timmer was quite a lady’s man, unlike her. The Tornado Chasers star has had two confirmed relationships before tying the knots with the FOX channel anchor.

Reed has a thing for girls who are into meteorology, as all of his confirmed partners are fellow meteorologists. The P.h.D holder from the University of Oklahoma has dated Ginger Zee and Jene Young.

Similar to Molina, Zee and Young are both meteorologists and share the same interests as Reed. As for Maria, details regarding her previous relationships are undisclosed.

LIVE update from the KS/CO border with a TORNADO OUTBREAK anticipated today across a large part of the central and southern Plains. Threat of strong, violent tornadoes looks maximized in western KS/NE. Storm chasing for @RadarOmega_WX pic.twitter.com/XtI0piD6Xd

Despite sharing similar interests and working in the same field, Maria Molina and Reed Timmer’s love story didn’t last long. As of today, both are doing what they love to do.

We wish the best to the ex-couples for the days to come and hope they cross each other’s path again.