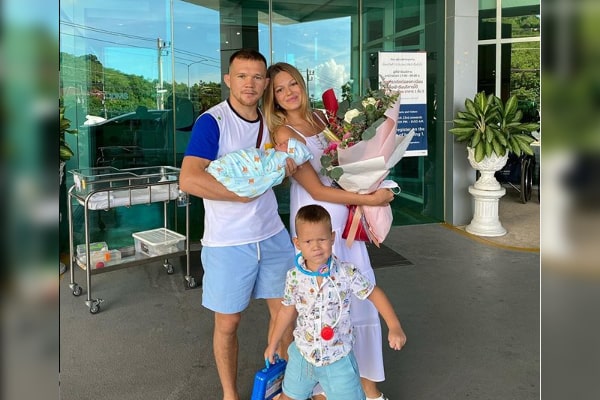 Imagine the punch of a man nicknamed ‘No mercy’ and imagine the love-life of the fighter. Yes, it is about the fierce warrior, a Russian professional mixed martial artist, Petr Yan, and his lovely wife, Julia Yan.

Petr started his fighting career in 2014 and has made remarkable progress since then. Besides his undeniable romance with his game, his relationship with wife Julia is not different at all, except he is the softest. Here is everything we found about the beautiful couple, Petr Yan and Julia Yan.

The universal truth of fame, nothing you do is your business. All eyes are on the celebrities, and they are bound to live up to their fans’ expectations. But Petr and his wife, Julia Yan, have managed to break the cliché and are leading a very secretive life.

Furthermore, Petr Yan’s wife is extra cautious about letting people into her private matters. As a result, her Instagram account is also private. However, Petr is not used to disappointing his fans and shows off his lovely wife and their family moments via his account.

Petr once posted a birthday post, which shows that the couple has been together since their high school years. Thus, the history of this beautiful pair runs way back then we think.

Aforementioned, the couple is very secretive, and most of their lives are off-camera. However, the little bits of the updates show that Petr Yan prioritizes his family moments.

Going through Petr Yan’s Instagram, he loves his wife, Julia dearly, and is a doting father. The family of three has toured several places together. Petr shares lovely pictures of them along with warm captions. Moreover, he makes sure to uploads photos of Julia on her birthday and other special occasions and wish her. Although the calculations of their conjugal strength are solely based on Petr Yan’s Instagram account, their love seems and feels genuine.

Petr Yan’s wife is a beautiful woman with blonde hair, dark eyes, and a contagious smile. The epitome of a classic woman nurtures her family as much as her crucial privacy. Thus the amount of time Petr Yan spends with Julia and his children proves how dearly he holds his family.

As stated above, Petr much emphasizes on family time, and his Insta feed proves it. He is a proud father of two boys. Petr Yan’s wife, Julia, welcomed their first baby boy in July 2016.

Petr Yan’s son is the spitting image of himself and possibly the most adorable human. He loves animals and loves spending time with his parents. The little guy is growing a lot faster and amusing, both Petr and his wife.

The first child always tends to bring the most change and happiness in a family and so did Petr’s son. He accompanies Petr everywhere, from the gym to vacations, and manages to soothe his father’s stress.

Petr Yan welcomed his second son, Konstantin Yan, in June 2020 in Phuket, Thailand. The arrival of his second baby enthralled him and is more pumped for the UFC bantamweight title.

Happy to announce the arrival of my second son, Konstantin Yan 🙏🏼

The couple’s eldest son is also excited to welcome the newest member of the family and is delighted to have a younger brother as a new playmate.

The family of four seems to be complete at the moment, but we can expect more Yan miniatures, can’t we?