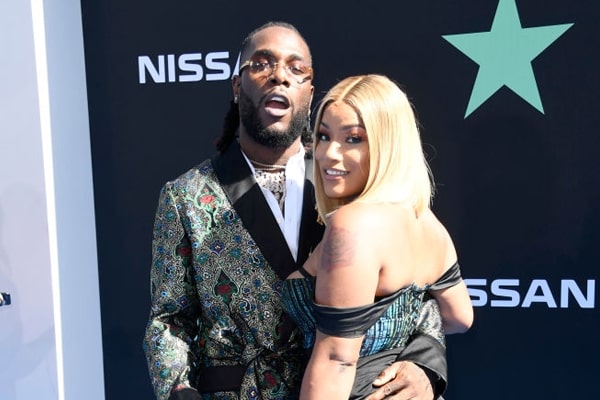 Burna Boys and Stefflon Don have been together since 2019 and are still going strong curving all the dating rumors. Image Source: Getty Images.

A couple with a similar vision lasts longer and healthier. Such is the relationship between U.K. rapper, Stefflon Don and Burna Boy, The couple has been together for a year by 2020 and has sparked break up rumors.

British rapper, Stefflon Don, aka Stephanie Victoria Allen, and Nigerian singer, Burna Boy, aka Damini Ebunoluwa Ogulu Rex, have made a considerable fanbase among people who ship their relationship. Thus, let’s find out about their lovelife and if they ever addressed the breakup rumors.

How The Romance Began?

The rapper couple Stefflon Don & Burna Boy confirmed their relationship back in 2019. Burna Boy’s girlfriend, Stefflon Don, approved their status after Burna shared a story of her sleeping on his chest on Instagram.

Furthermore, Stefflon further talked about her relationship in the latter days. The couple seems to have met in Ghana. According to Pulse, The Hurtin’ Me singer met while on a trip to Ghana when she missed her flight and decided to attend a show where Burna Boy performed.

Stefflon Don’s boyfriend, Burna, told her that she was going to be his wife, and she didn’t remember what he had told her in their first meet. But, Burna reminded her, and she was a little baffled by it. She also mentioned that Burna Boy said her people would soon see an engagement ring.

Thus, there started their romance, and the rest is history. The couple has shared a couple of posts here and there on their social media handle. They exhibit a healthy relationship and vibes significantly. Once, when Burna Boy’s girlfriend answered a few questions from her followers, including the one who asked if she was ‘half Nigerian.’

Burna Boy’s partner said no, but her kid would proudly be.

Burna-Stefflon Are Together And Strong

From the moment they started their relationship until today, they send an aura of security and faith. Because the entertainment world is colorful and, therefore, most relationships’ forever ends after a month or two.

However, Burna Boy and Stefflon Don have maintained and nurtured their relationship since 2019. They celebrated their first anniversary in January 2020. The pair shared a photo of themselves caressing each other.

Furthermore, BET Award winner, Burna Boy, spoils his girlfriend with special gifts and truckloads of love. He is not afraid to claim his love and be proud of his partner.

Both Stefflon and Burna not only have a beautiful relationship but also the dream of a healthy marriage and a happy family. Recently, Burna revealed about being open to the idea of collaborating musically, and Burna made sure to let the world know that his sweetheart is the boss. Therefore, he is waiting for his love to give the green light.

Rumors Of Break Up

Well, people are free to imagine and quick to assume. Thus, the rumor of Burna-Stefflon’s break up does not sound that weird. The news sparked when the videos of Burna Boy and his ex-girlfriend re-surfaced. The Internet is a bizarre world.

Then the whole breakup shenanigans began. However, Burna Boy’s girlfriend, U.K. rapstress, Stefflon, addressed the rumors after many fans fancied that Burna might be back with his ex-partner, Shyngle.

Although Stefflon put up a story writing ‘old videos, please let it rest,’ her fans were still suspicious. Weird! Hence, she was obliged to post a fresh screenshot of their video call and dump the rumors aside. Funny how fame makes everything personal about a person a public affair.

Anyhow, the couple has pretty much zero photos of them together on Instagram. However, they do appreciate and celebrate one another’s success. Although they are official, they have refrained from posting on their Instagram.

Today, both Burna and Stefflon are quarantined in their respective home and are supporting the massive movement of #blacklivesmatter. Thus, more power to them. Also, let’s hope to hear the wedding bliss amidst the Corona chaos.