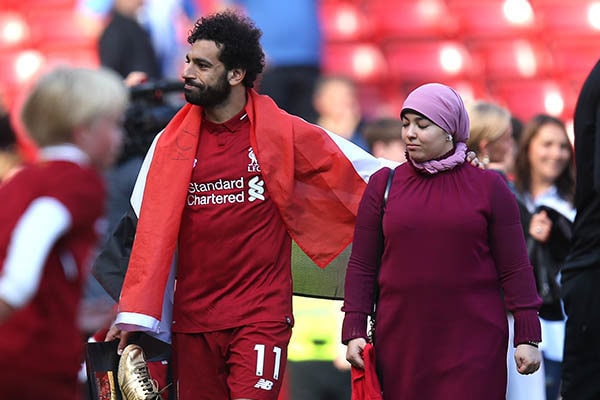 Egyptian football player Mohamed Salah is one of the hottest players in recent times and has been the talk of the town. Playing for Liverpool, he managed to score a ton of goals and won the 2017/18 PFA Player of the Year, even being considered one of the best players in the world alongside the likes of Lionel Messi, Cristiano Ronaldo, and Neymar. A successful professional career has been translated to his personal life as well thanks to his marriage to wife Magi Salah.

Magi and Mohamed Salah have known each other since they were small children and the two went to the same school in their village of Basion Gharbia. The two tied the knot almost 5 years ago on December 17, 2013. The two have a strong marriage and their love for each other is eternal. She currently works as a biotechnologist and the two are very happy together.

Magi and Mohamed’s relationship reached a new level after Magi gave birth to their daughter Makka in 2014. The two named their daughter after the Islamic holy city Mecca. Both of them love their daughter very much and it is visible in Mohamed’s Instagram page. Mohamed’s family is very cute and their love for each other is tremendous.

Magi and Mohamed are actually schoolmates so they have known each other for a very long time. The two developed a great chemistry between each other and ended up getting married.

Magi and Mohamed got married on December 17, 2013, in Egypt and which was attended by thousands of people, including a lot of Egyptian celebrities. Magi mostly stays away from the spotlight but she did attend her husband’s game for Liverpool against Brighton as she sat pitchside at Anfield, the home of Liverpool.

Mohamed and Mago have been blessed with a daughter named Makka Salah. Makka was born in 2014 in London at the Westminster Hospital, as the couple used to live in London as Salah was Chelsea player at that time.

Makka is named after Mecca, the holy Islamic city. Salah regularly posts pictures with his daughter, showing his love for him. Makka was seen in the pitch kicking a ball when his father was receiving the Premier League Golden Boot for the 2017-18 season.