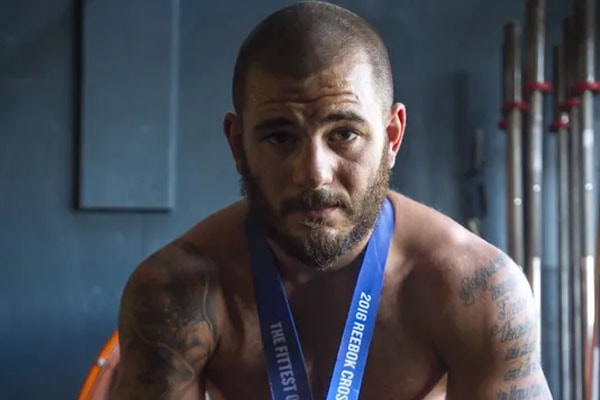 Mat Fraser is a Crossfit athlete and one of the fittest men in the world. Image Source: Pinterest.

It’s normal for every people to get tattoos nowadays. It can be your favorite quote or symbolic figure that you admire. Whatsoever, Mat Fraser has got some amazing tattoos on either side of his shoulder. If you want to know him better, the following thing you are going to encounter is quite worthy of keeping you interesting. With his packed muscle, the Tattoos looks more amazing that don’t let our eyes off from drawing much attention.

Mat Fraser is known as one of the fittest men in the world. He is a Crossfit athlete who has also laid a hand on weightlifting competitions with victory many times. He follows a strict schedule on diet and exercises to maintain his weight.  As of now, Mat is 29 years old and has got a total of 86 kg. That’s pretty impressive. Mat Fraser is in a loving relationship with his girlfriend Sammy Moniz.

As aforementioned, Mat Fraser with his tattoos on his shoulder; like everybody else, he has a specific reason behind getting his tattoos. On his left shoulder, you might see a bunch of words inked which he says it’s a serenity prayer. It looks like a spell that helps him to move on and encourage him during difficult situations. It is quite difficult to put the words into the correct order as it has been Italicised. Mat explained in an interview that this prayer reminds him to control what he could and accept that he couldn’t control everything.

On his Instagram, he has posted a photo of his tattooed shoulder captioned courage, wisdom and serenity. It looks like a secret mantra that preserves his every spot of victory. He has continuously won Crossfit competition from 2016 to 2018 in the first place. In 2016, he won the title of the Fittest man on Earth.

Mat Fraser had his second tattoo when he went to Italy. All this credit goes to Mat’s Crossfit fan, Antonio who owns a tattoo shop in Milano City.  He is also a crossfitter whom Mat considers as one of the world’s best tattoo artist. Mat was beyond happy sharing his new tattoo which took an astounding time of six hours to be completed.

The tattoo on Mat’s shoulder shows two women. Mat hasn’t revealed any specific meaning behind this particular Tattoo but we believe it has got one. When you learn about Mat, he doesn’t only seem a bodybuilder and athlete guy, but you will discover a loving partner who loves his beau as much as he loves his career. He had once shared a lovely picture of him and his girlfriend Sammy Moniz on his journey to Capri.