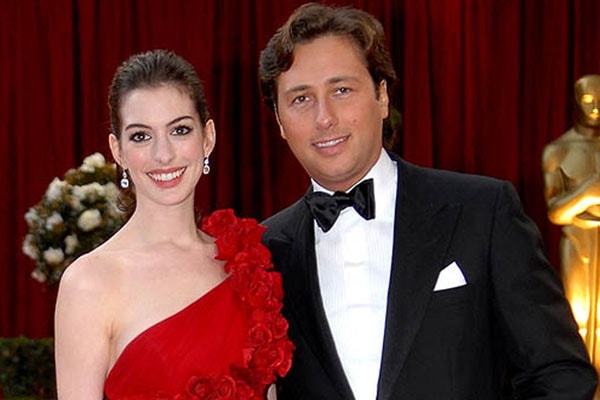 Raffaello Follieri, Anne Hathaway‘s ex-boyfriend, is an Italian real state developer famously known all over the world for Vati-Con scandal. Anne Hathaway and Raffaello dated from 2004 to 2008.

The Princess Diaries star Anna Hathaway and Raffaello Follieri had a great starting. But because of an unexpected scandal of Raffaello, the two broke up in 2008 a few days before he was arrested.

Anne Hathaway and her ex-boyfriend Raffaello Follieri were introduced to each other by a friend sometime in 2004.  At the time being, Anne was a rising star in Hollywood, and Raffaello just seized the chance of making her his sweetheart. They began dating shortly after knowing each other.

During the four years of dating, Anne and Raffaello were head over heels for each other. They were seen attending various fashion shows, going on a vacation, cruising in yachts, going out for expensive dinners. It is not a great deal that they were living a lavish life as any other wealthy people would live.

The headlines about  Anne Hathaway’s ex-boyfriend Raffaello Follieri who turned out to be fraud, circulated all over the world in 2008. Raffaello Follieri had a dark secret behind his charismatic personality and his successful business. He was arrested for defrauding $50 million investment which was meant to buy Roman Catholic churches in the U.S.A. The investors were billionaire Ronald Burkle and Bill Clinton.

Raffaello Follieri was served to four and a half years in prison after he pleaded guilty in New York County Courthouse, Manhattan. He got released on May 25, 2012, after the completion of his prison sentence. He was deported back to his country Italy right after his release.

Raffaello Follieri Back In The Business

According to the report by Page Six, Raffaello Follieri is willing to invest in Foggia Calcio soccer club in Southern Italy. He shared that he is being helped by some of the investors with whom he worked before including Ronald Burkle. But the spokesperson for Ronald Burkle has denied Raffaello’s statement.

No one knows for sure what Raffaello Follieri is up to. The once famous investor and lover of the gorgeous actress Anne Hathaway created a negative image among the public. Will he be successful in re-establishing himself as a trustworthy person and win the heart of people? Well, time will tell that.