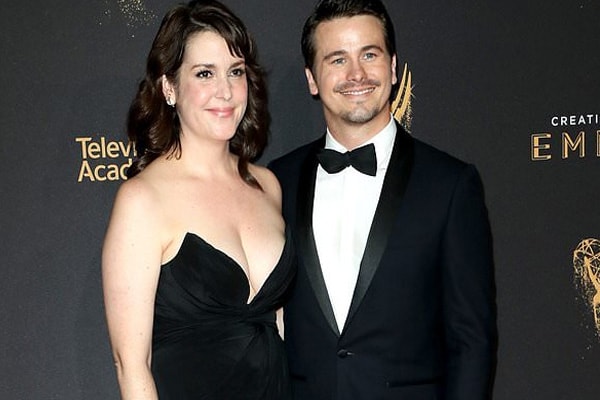 The Dreamer of Oz star, Jason Ritter’s fiance Melanie Lynskey was born on 16th May 1977. She is a New Zealander actress and is also known by her soft-spoken voice. After five years of dating, she got engaged to actor Jason Ritter in February 2017. The couple welcomed a daughter in December 2018. You probably recognize Melanie as Rose from the famous sitcom Two and A Half Man

Melanie Lynskey’s fiance Jason Ritter announced that his fiancee has a sound phobia and he has to be careful while chewing food. She reacts negatively to every normal sound she hears.

During an interview with Jimmy Kimmel, Jason revealed that his soon to be wife Melanie has a disorder called Misophonia. Many people might have been confused or some know that already. People having Misophonia hear twenty times louder than we normally hear. And she can hear that loud. That’s why she reacts differently to Jason whenever he eats something hard like cereals. She must be irritated a lot for sure.

Jason said that his fiancee could immediately identify the bad eaters around their dine. Definitely, it must have been hard for her to endure such voices while in restaurants. He jokes whether she has got like a superpower to hear little things that normals can’t do. Whatever the fact, the couple were delighted to have a daughter in their life.

Melaine tweeted saying that meeting her beau Jason was life-changing for her. He was patient with everything that is going around with her.

Making this choice was life-changing for @JasonRitter, and also for me. Because of his strength and courage, we got to stay together and be pretty disgustingly happy. I can’t imagine life without him. Very proud of my love today. https://t.co/Kzanep7xqL

She has even thanked him for not getting annoyed with her Misophonia. The couple has been in a relationship for almost six years now. It gives us the fact that Jason and his fiance Melanie are perfect for each other. After all, understanding each other in a relationship is the key to a happy couple’s life. And fans are eagerly waiting to hear their wedding date soon.

Besides her feature role in movies, Melanie also does a voiceover. She is a soft-spoken woman. She has starred in many animated movies such as Movie animals, Over the Garden Wall and she was also featured in the animated movie The Life and Times of Tim as Becky.

You can also hear her voice in Summer Camp Island. In 2012, Lynskey also starred as an animated version of herself for an airline safety video for Air New Zealand.