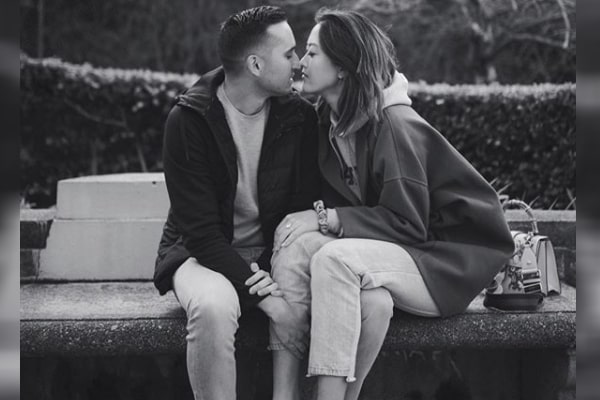 Michelle Wie and husband, Jonnie West are happil married since 2019.

Michelle Wie is a professional golfer who became the youngest player to qualify for USGA amateur champ at 10. She turned professional shortly after her 16th birthday in 2005 and currently plays on the LPGA Tour.

Besides having a thriving career accompanied by enormous endorsements, Michelle Wie is celebrating robust love with her partner, Jonnie West. The pair got married in 2019 and welcomed a daughter in 2020 amidst the pandemic chaos. Well, happiness has filled the pair’s life. Therefore, let’s have a look into Michelle Wie’s wedding with her husband, Jonnie West, and their love life.

Were Engaged After Two Months Of Revealing Their Relationship

Most celebrities like to keep their relationship confidential. So was the case with one of the premier faces of women’s golf, Michell Wie. Wie and director of basketball operations for the Golden State Warriors, Jonnie West, announced their relationship in January 2019.

There are no accounts of their relationship before that. However, glancing at Michelle Wie’s husband and her chemistry, they possibly seem to have dated for several years before announcing their togetherness.

Furthermore, another reason to speculate their long-term relationship is that the Wie-West couple got engaged after two months of announcing their relationship. Wie’s husband, Jonnie, proposed to her in San Fransisco in March.

They announced their engagement via Insta with Jerry West‘s son, Jonnie, on his knee, asking the hands of his then-girlfriend-now wife, Michelle.

However long the couple dated, they seemed happy from the moment they announced their relationship. Furthermore, the West couple soon walked down the aisle.

Married At Beverly Hills in 2019

The West-Wie couple was not done with surprises after engagement within two months of announcing their relationship. The pair shared their vows on August 10, 2019, at a private home in California.

Michelle Wie’s grand wedding ceremony and reception were held at a private home in Beverly Hills, California. The guest lists of 150 or so included several notable celebrities, including Wie’s long-time coach, David Leadbetter. According to Golf Channel, David noted Wie looked radiant and was extremely happy.

The West couple has been living in San Fransisco, where her spouse, Jonnie, is based. Moreover, Wie has no plans of retiring after marriage. After several surgeries and recurring pain, her games are at a halt. Additionally, pregnancy/motherhood and pandemic has aided more to her leisure these days.

Welcomed Their First Kid In 2020

The back-to-back surprises in by the West couple doesn’t rest even amidst pandemic. Jonnie West’s wife, Michelle, gave birth to her first child, a daughter, Makenna Kamalei Yoona West, on June 19, 2020. Michelle Wie’s baby arrived four weeks before her due date.

The new mom shared photos of her newborn with her husband, Jonnie, from the hospital via her social media handle. She captioned the picture with the sweetest message claiming hers and Jonnie’s love for Kenny and are excited about her growth.

The fast-growing West family announced their pregnancy in January 2020. A five-time winner on the LPGA, Michelle Wie wants her daughter to see her play and witness her to become a strong woman.

According to Golfweek, Michelle, Jonnie West’s spouse, revealed that she dreams of having a big family. Therefore we shall wait for more news of Michelle’s growing family.

The love story of Michelle Wie and Jonnie West somewhat relates to that of a fairytale. It’s as if they recognized one another as a soulmate and invested time and emotions.

Although the news of their relationship flashed in January 2019, they moved fast and did not allow the media to stick their noses in their private life. However, the couple often flaunts their love on Instagram. The newly-wed couple not only shares an athletic background but their passion for golf as well.

While taking to NY Times, the new mom revealed that her partner is a massive golf nerd and tries to put a golf club in their daughter’s tiny hands.

Michelle Wie’s partner comes from a basketball background while she is a golf-star. Let’s see what their daughter chooses, a basketball or golf club.

Well, the Wie-West couple transitioned from different phases of the relationship smoothly. Let’s hope to hear more good news of the couple and Wie’s grand comeback in the competition.