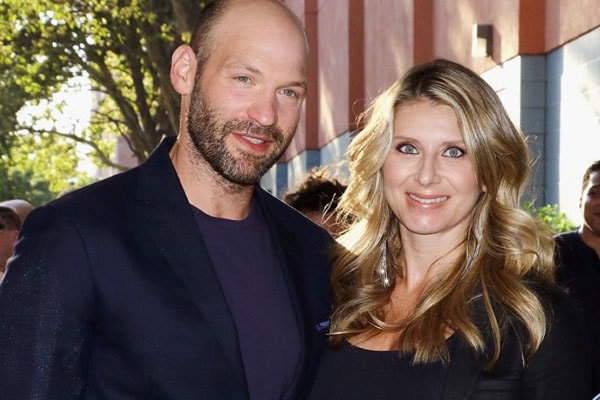 The Ant-Man actor, Corey Stoll‘s wife Nadia Bowers was born on July 22, 1973. She is an American actress who is best known for her role as First Lady Todd in TV Series Quantico, Professor Austin in Mercy Mistress, and she has also played a role in Orange Is The New Black.

Nadia and Corey are one of the celebrated couples who has been into a romantic relationship for a long time. Nadia and Corey got secretly married in 2015. She was pregnant during the time of marriage and kept the news unrevealed until the couple announced in June 2015. In October of the same year, the couple welcomed a baby son whose information hasn’t been revealed yet.

After a long term relationship, the couple took a step further to be parents. Being a parent comes along with lots of responsibilities and Nadia Bower’s husband Corey was nervous for his first child. He said that Nadia is more competent than him and his kid would be okay. She appeared with her baby growing bump with her husband Corey in Tony Awards.

Nadia and Corey rarely share pictures of their private life. It seems like they don’t want to gain public attention. However, we have got a small sneak peek of Corey Stoll’s son

Nadia is an amazing actress who has been featured in many TV Series like Law and Order, The Bar Mitzvah Club, Quantico, and Mercy Mistress. The 45-year-old actress earned her M.F.A from NYU’s Acting Program at the Tisch School of Arts.  Having started her career in various regional theaters, TV, and film.

Nadia Bowers had tough moments with her sister, Alexandra Bowers. In 2015, more than 33,000 people died of a heavy dose of drugs in the US. Nadia’s sister was one of them. She still misses her final moments with her sister. In commemoration of her death, she wrote a letter to the drug dealer who gave her the drugs.

The person isn’t found yet, and in the letter, she has addressed that person as ‘Man.’