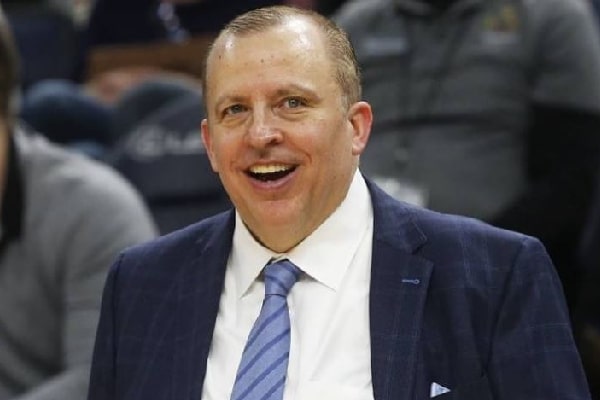 Tom Thibodeau is the head coach for the New York Knicks of the National Basketball Association(NBA). He is mostly known for his great defensive gameplay strategy. Until now, he has worked as the head coach of four NBA teams, including Boston Celtics, Minnesota Timberwolves, and Chicago Bulls. This dedicated coach has also served as an assistant coach for the national basketball team of the United States from 2013-16. During this period, he became successful in bagging a gold medal at the 2016 Olympics Games. He has been in this game for 25 years now, and he certainly has a long way ahead.

But enough about his career, now let’s talk about his love life. According to an article by the New York Times in 2012, Tom Thibodeau was once engaged during his years at graduate school. There are also rumors about his affairs with other celebrities. He certainly has a fine career and incredible achievements in his life, but one piece of the puzzle is missing; who his wife is. Has he ever got married? Who is Tom Thibodeau’s wife? Is he divorced or dating? Let’s find out.

Tom Thibodeau is a big name in the field of American Basketball, yet very little is known about his personal life. Read the whole article to know about his love life and wedding.

This tough man, Tom Thibodeau, likes to keep his personal life under the radar. But according to The New York Times, he was been engaged once.

Thibodeau had attended  Salem State University. It is said that he had dated two girls simultaneously while at graduate school. And incidentally, both of their names were Debbie. Quite surprising, right?  And on top of that, he got engaged to one of the ‘Debbie.’ This is quite confusing since we don’t know which Debbie we are talking about. His college teammates said that it was one of the two Debbies that Thibodeau had dated. Thankfully, there wasn’t a third Debbie. So apparently, Thibodeau and Debbie were fellow students at Salem State University.

Did Thibodeau Get Married to Debbie?

After the engagement, Thibodeau and Debbie started planning for their wedding. But six weeks before the wedding date, this frantically busy coach realized that he did not have room for marriage and its commitments in his life. He then canceled the wedding and returned all the gifts that they had received.

This is not quite surprising as the NBA recognizes him as the most passionate and obsessive coach among a huge crowd of extremely passionate coaches. John Galaris, the athletic director of Salem State, said Thibodeau told him, “There’s no room in my life for a woman if I.m going to be a basketball coach.” Debbie must have been devastated, but this is how Thibodeau is. We feel sorry for the poor Debbie, who couldn’t become Tom Thibodeau’s wife, but his decision, as he expected, had a positive effect on this career. Thibodeau is one of the best coaches in the NBA, no questions on that.

His Relationship With Kate Upton

The rumors of the affair between Kate Upton and Thibodeau started in 2016. The rumor took over the sports media for months. If you don’t know who Kate Upton is, she is a ‘modern-day Marilyn Monroe’  working for Sports Illustrated’s covers to movies.

Around the same time, the rumors about the Bulls removing Thibodeau was going on. In one of his public appearances, where he was asked about the end of the contract, Thibodeau said,” The rumor about my date with Kate Upton, started by me, I’m not commenting on that, either. So. let’s  move on.” An affair between a model and a strict coach is not something that we might expect. And yes, it turned out that we were right. Apparently, it was just a rumor started by himself to show the people in the media how stupid rumors can be and how brain deaded media can be.

Later, the rumor about the coach leaving the Bulls came true, whilst the rumor of his affair was false as Kate Upton married MBL player Justin Verlander.

Although he has no time for love life, he certainly loves his mother’s pasta sauce, grilling, biographies, and the beach. It’s strange to read this, but he also loves children. His catchphrase “Do. Your. Job” says that, apparently, Tom Thibodeau’s wife is his job.