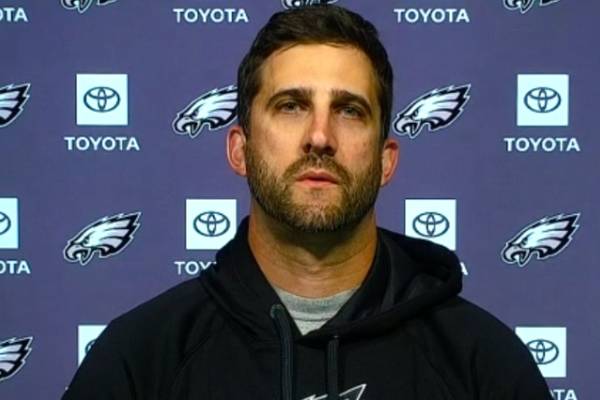 Nick Sirianni is quite a popular name in the football world. The 40-year-old New Yorker has had a roller coaster ride as a coach. He began his coaching career at Mount Union. Surprisingly, just after this one stint, he leaped into the NFL in 2009. Nick was appointed the offensive quality control coach by the head coach of Kansas City Chiefs, Todd Haley. Apparently, Sirianni was a student in the same college Todd was coaching wide receivers.

Since then, Nick has worked in different positions as a coach for various organizations. Sirianni is currently the head coach of the Philadelphia Eagles. Prior to this job, Nick had never been hired as a head coach. He worked as the quarterback coach for the San Diego Chargers and offensive coordinator of the Indianapolis Colts before landing his current job.

Besides football, the charismatic young coach is married to his gorgeous partner, Brett Ashley Cantwell. The couple has been in marital bliss since their wedding. Furthermore, they are parents to their two sons and a daughter.

So, without holding up, let’s get to know Nick Sirianni’s wife, Brett Ashley Cantwell, and their happy marital life with kids.

Nick Sirianni’s Wife Brett Is A Native Of Missouri

Nick Sirianni’s partner, Brett Ashley Cantwell, now Brett Sirianni, was born on 26th August 1986 in Springfield, Missouri. She is the youngest child of her father, Bradford Cantwell, and her mother, Debbie Wiedercht Cantwell.

Similarly, she has an older brother, Justin Cantwell. He is 41 years old and six years elder than Brett. Talking about her sister, Courtney Eline Cantwell aka Courtney Burns now enjoys her life as a wife and mother. She is 39 years old, just your years senior to Brett.

Substantially, Ashley completed her education in Kansas and started to work as a teacher there. She was fond of teaching and attracted to the aspects of the job.

Dated Nick For Couple Of Years Before Marriage

Brett Ashley Cantwell was living in an apartment while she was a teacher. Similarly, Nick also used to live in the same building. The now-married pair often used to run into each other many times in the apartment complex.

Suddenly, Nick asked her out one day, but she was hesitant and unsure about it.

Luckily, her sister, Courtney, made her go out with Nick talking her into it. After the date, the love birds started dating and got engaged two years later. The couple finally married in the summer of 2013 on 22nd June. The wedding took place at the Schweitzer United Methodist Church, situated in Kansas City, Missouri.

Nick Sirianni’s wife, Brett Ashley Cantwell, was dolled up with an ivory lace gown during their marriage. Soon after their wedding, the lovely duo moved to San Diego. The San Diego Chargers hired her husband, Nick. Before this, she had never moved out of Missouri, expressing that she loved the city and her work there, but it was the right time.

Nevertheless, Brett must be living happily with her husband and kids on the East coast currently.

A Mother Of Three Children With Nick

As stated earlier, Nick Sirianni’s beau, Brett Ashley Cantwell, is a loving mother to his kids. During the pair’s nine years of marriage, they have welcomed two sons and an adorable daughter into this world. The duo’s eldest son’s name is Jacob Sirianni. Their youngest son is named Miles Sirianni, whereas their daughter’s name is Taylor Sirianni.

Unfortunately, we could not find any other details and information regarding the couple’s children. Furthermore, it looks like Brett and her husband Nick prefer to live their life away from the limelight. After her marriage, Brett gave up her job and prioritized giving time to Nick and their children.

We congratulate Nick Sirianni’s wife Brett Sirianni on her blissful marital life and wish her further good luck in raising her kids.