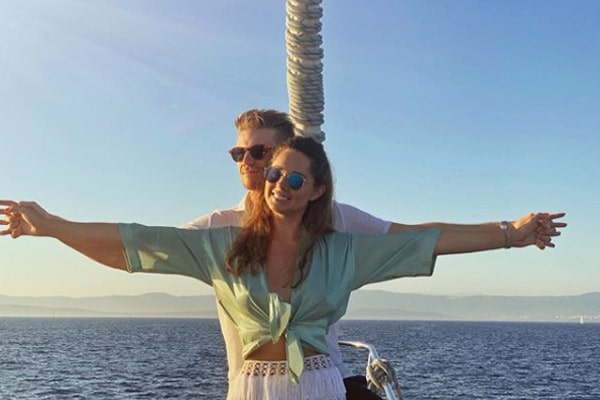 The famous German professional racing driver, Nico Hulkenberg, is the winner of several racing champion titles. Back in 2015, Nico contested two rounds of the 2015 FIA World Endurance Championship Season for Porche, winning the 24 Hours of Le Mans on his very first attempt. Previously, he achieved success in gaining the 2009 GP2 Season Winner title, being a rookie.

Along with winning various titles throughout the racing career, Nico conquered the heart of millions of female racing fans. But, among those all, Egle Ruskyte succeeds in achieving the crown of Nico Hulkenberg’s girlfriend. So, who is Egle, and are the couple planning to marry? You can have a grasp of it all here.

After graduation, Egle now runs her own fashion business that particularizes in handmade crochet clothes and beachwear. Every piece she designs and makes is skillfully hand crocheted in limited quantities by herself and her team.

Crochet lovers can view as well as order her stunning products from the shop’s page, Instagram, and Facebook. Egle and her team mention the price tag of their products while they keep them for sale so that their customers can decide which product to buy as per their budget.

Nico and his girlfriend Egle are in a romantic relationship since the year 2015.

Egle likes to visit around the world on her free days. So during the holidays, the gorgeous fashion updated girl frequently travels various places with her beloved boyfriend. Moreover, she is often in the snaps with Nico at the motor racing supporting her love.

Though Egle and Nico do not share many photos at the same instant, they are enjoying their love life.

Talking about the plans of the couple on marrying, they do not seem to be ready to tie their marital knot yet. Moreover, there is no news of Nico sharing his plans on walking down the aisle with his girlfriend to date. Probably, the duo, Nico, and Ruskyte still have a lot to accomplish concerning their career.

Addition Of A New Member In Their Small Family

Though it has been over four years, Nico and Egle dating one another, they do not have any children together. However, the pair added a Pomeranian dog, which they named ‘Zeus’ to their small family back in 2019.

The newest member of the duo’s family, Zeus also has an Instagram page. Nico and Egle regularly post pictures of Zeus on his page. There in the gram of Zeus, we can also have some glimpse of the former Formula One driver, Nico, and his date, Egle.

Also, the lovers take Zeus out along with them during their holidays and other special occasions. They never forget to share their pictures hanging out with their cute pet on their social media pages.

Before the entanglement of Nico with Egle, he was in an affair with police officer Laura Zinnel for eight years. Zinnel regularly used to appear in and around the paddock supporting the 2009 champion of the GP2 Series, Nico, in his early F1 days.

However, Nico and Laura did not take wedding vows in the course of their relationship. Also, they did not have any kids together.

Reportedly, their affair ended in 2015. The reason for Nico and Zinnel’s split-up is not within reach of media.