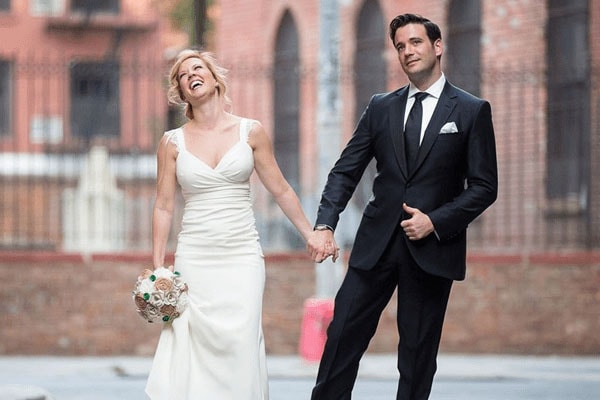 Patti Murin along with her husband Colin Donnell

The lovebirds really must love the number 19, because if we are to ignore the months and year, then Patti and Colin got engaged on 19th too but of December 2014.

All thanks to a mutual friend that Patti and her husband Colin met up. The cute pair has known one another since 2006. Patti Murin and Colin Donnell started dating when they were part of “Love’s Labour’s Lost“, a theatrical drama.

Three years have crossed since Patti Murin married her husband Colin Donnell in 2015. Stephen Amell and Andrew Rannels were some of the few guests present at Patti Murin’s wedding. Patti considers herself a super-fan of ‘The Bachelor‘ and ‘The Bachelorette‘ so she held her own rose ceremony at the event.

After the completion of the wedding, Patti Murin tweeted a photo showing hers’ and Colin’s rings. The caption requested her fans to bear for a few days as she has a lot to talk about the wedding. And in her other tweets, Patti thanked Andrew for the help in creating the rose ceremony from ‘The Bachelor‘ and ‘The Bachelorette‘, her favorite show.

All I want to do is talk about our wedding last night so please bear with me for a few days. pic.twitter.com/TFbsmyEjPX

Patti Murin and her husband Colin Donnell have a lot of things in common. Despite having food allergies to different fruits and vegetables, both of them love eating. In an interview, they stated that eating is a big part of their relationship.

Looking at the wedding pictures of Patti Murin and her husband Colin Donnell, we can know how happy they were. Plus they still are so glad.

The romance between Patti Murin’s husband and Colin Donnell still hasn’t faded away. Just a couple of months ago the couple celebrated their third anniversary. Their love seems to be the same as it was when they first met.

Looking at them we don’t think that the love will end any time soon. If everything goes nice, then we might even get the news of Patti Murin’s pregnancy. Who knows if they are planning for an arrival of a child.