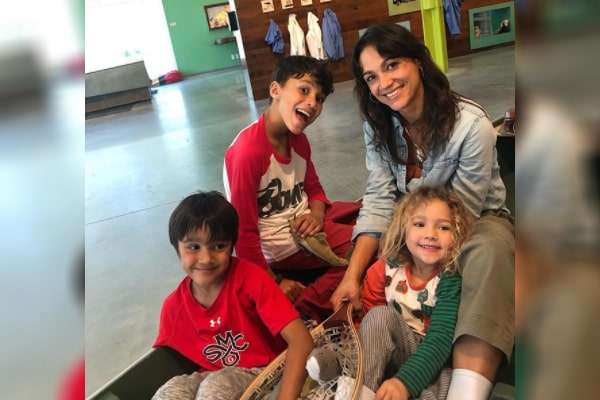 Roger Guenveur Smith is an American actor, and director best known for his collaborations with Spike Lee. Born in 1955 in California, Smith has worked in several movies, including Malcolm X, Poetic Justice, etc.

Roger has made a good name for himself in the entertainment industry, all while building a family with wife, LeTania Kirkland Smith. The love birds are pretty good together and share several pictures online. Roger Guenveur Smith is a fantastic person and entertainer, but a stunner is his wife, LeTania. Hence, let’s follow her life a little.

A person in touch with their self is absolutely beautiful and fiercely vulnerable. Such is actor Roger Guenveur Smith’s wife, LeTania Kirkland Smith. The beautiful woman is a certified yoga instructor.

The University of Southern Carolina graduate pursued dancing and found her love for yoga.

According to her bio, LeTania discovered yoga via her dancing career and was immediately drawn to the practice. Moreover, she received her certification in Vinyasa Yoga at Laughing Lotus Yoga Center in New York City and began her teaching journey.

Roger Guenveur Smith’s wife, LeTania, was a phenomenal teacher, and thus, her classes at Vinyasa flow proliferated significantly. She not only strives to provide an ecstatic experience but also shares philosophies as a means to spirited practice and involves music.

Furthermore, she is turning the harsh times, such as the pandemic, into an opportunity. According to her Facebook profile, she seems to be running a yoga class via Zoom.

Smith’s partner believes in building awareness in the body temple and create clarity in the mind and spirit via yoga. Let’s hope she succeeds in doing so and be a part of making the world a peaceful place.

Furthermore, LeTania is a writer. She has a blog named Of Many Worlds, where she shares her experiences, talks about her daily life and racism. Mrs. Smith talks about her children growing up and how she and her partner are working on educating them about Black’s history and their struggle for ages.

Going through her blogs, it shows how in touch she has been with herself and with the world to make a difference. Furthermore, LeTania seems to be a progressive learner and learns new things every day.

Aforementioned, Roger G. Smith’s partner is in sync with her body and mind and aspires to create an environment for mindfulness. Besides that, she is also a writer and shares her love for her parents.

Born to Tanya Kirkland and her husband, she is a very loving daughter and appreciates her parents very much.

Yes, LaTania is a family person and often spends time with them or writing about them. Furthermore, she never misses wishing her parents on their anniversaries or occasions like mother’s or father’s day. Hence, LeTania had a beautiful upbringing with parents who are married for more than three decades.

Likewise, Roger’s sweetheart did not grow alone. Her sister, Misti A Kirkland accompanied her, and her brother, Mark Kirkland came when she was 18. Even today, she posts about her siblings and cherishes memories with them.

Roger Guenveur is a very private person and isn’t present in any form of social media. But his wife is. Even then, the couple is pretty private about their relationship and shares pictures with simple captions.

Mr. and Mrs. Smith seems to share a special bond and understanding that has made their marriage beautiful. Although we are unknown about when and where the pair shared their vows of forever and more, we do witness their love.

Furthermore, Smith’s life partner shares glimpses of their lives and writes, which mostly says how amazing husband he is. The couple shares three babies.

However, LeTania Kirkland’s husband has an adult daughter from his previous marriage with Carolina Smith. Whereabouts of both daughter and Smith’s ex-wife is unknown.

Aforementioned, the Smith couple is very silent about their relationship, but god forbid if LeTania stops sharing about their adorable kids. She is a doting mother of three children, two sons, and a daughter.

The pair welcomed their first baby, CY Smith, on May 16, 2012. Then followed their second son, Zollie Roy. Smith’s son, Zollie Roy Smith, was born on October 8, 2013, and became the heart of the Smith family. But, he was not the last kid.

Similarly, the love bird’s daughter, Zora Smith ‘shifted gracefully into this plane’ on June 6, 2016. She again mentioned the complicated feelings and the rush of knowing genders and pregnancy haphazard via her blog.

Well, LeTania has marked her children’s journey so well, they will grow up learning and appreciating every memory their parents shared about them.

Let’s hope to hear more of the Smith family in the future and all the world’s luck to Mrs. Smith in helping people find their inner peace.