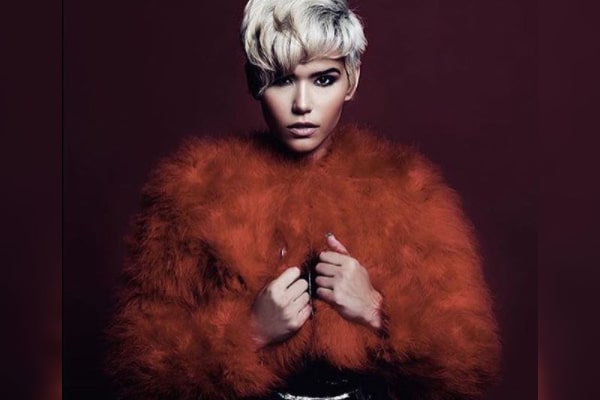 Rome Flynn is an American actor, musician, and model known for his portrayal of Zende Forrester Dominguez on the daytime drama, The Bold and the Beautiful. Besides the CBS drama, he also won the Daytime Emmy Award in 2018 for his outstanding performances since 2014.

Rome has released a couple of songs that have surpassed half a million streams on Spotify. If you think Rome Flynn’s time ends here, you’re wrong as he also has a beautiful daughter. Thus, today we will be talking about Rome Flynn’s baby mama, Camia Marie.

Actor/singer Rome Flynn’s ex-girlfriend, Camia-Marie, is a model and a social media personality. She also worked as a photographer who believes photography is living and capturing the moment. According to Marie’s work profile back in 2012, she wrote that she loves to shoot commercial, theatrical, and swimwear and is easy to work with.

Unfortunately, Camia-Marie decided to keep her working profile as well as private details confidential. However, with over 80 thousand followers, Rome Flynn’s ex-girlfriend has a significant influence on social media hence could earn her living off of modeling.

While going through her Instagram, she has mentioned modeling for Paul Mitchel and graced several other brands as their model. Although Camia is secretive, she is doing well as per her social media. Therefore, let’s hope she keeps on thriving as a model/photographer in the coming days.

Although Camia Marie is famous for her ethereal beauty, she rose to fame as Rome Flynn’s girlfriend. The duo dated back in 2015 and made a jaw-dropping couple.

Furthermore, both The Bold and the Beautiful actor, Rome and Camia, boasted their love via social media. He further revealed that the former couple met outside Camia’s house. He calmly told how they had kissed, how their teeth touched, and the rest became history,

Well, the rest became a page of their life’s history indeed. The couple parted ways after several dates and memories. As of now, both have moved on with their lives.

Did Not Gave Birth To Rome Flynn’s Daughter

Interestingly, Rome Flynn’s baby mama is not Camia-Marie but Molly Noriko Hurley. Although Camia and Rome Flynn’s daughter, Kimiko Flynn, share a beautiful bond, she is not her biological mother. She used to babysit Kimiko and visited them back in the days.

Camia loved the mother tag and thus never spoke up about not being Rome Flynn’s baby mama. Furthermore, seeing Kimiko-Camia’s videos, it is undetected. However, Molly Noriko’s Insta bio writes, ‘Kimiko’s mother.’ Since ‘Kimiko’ is not a common name, it is unlikely to mention it without context.

Regardless of the fact, the bond between Rome Flynn’s daughter, Kimiko, and ex-sweetheart, Camia, is impeccable nevertheless. Camia appreciated Kimiko for making her understand motherly love without having to birth her. Thus, there flies a misunderstanding.

Although Rome Flynn and Camia-Marie’s forever existed for a few years, she ended up creating another beautiful relationship with her current husband.

Yes, Rome Flynn’s ex-partner, Camia-Marie, recently shared her vows with her partner in July 2020. They were engaged in early 2020. Camia-Marie’s husband, Anthony Williams, seems to serve as engineering management personnel.

Although there is not much about the couple, they surely know how to make one another laugh. Moreover, both Camia and Anthony appreciate their presence much. As of now, they are married and are looking forward to a promising future. Let’s hope things work out perfectly for the couple.

Set To Bring Life On Earth

Despite Camia not being Rome Flynn’s baby mama, she enjoyed being a motherly figure. Hence, Camia and her husband, Anthony, cannot wait to welcome their baby to the world.

Rome Flynn’s former partner first introduced her baby belly in May. Surprisingly, she walked down the aisle with her baby and announced it was a boy via Instagram.

Camia and her husband, Anthony, are beyond happy and excited to welcome their first kid. Let’s hope Camia-Marie enjoys being a mother and nurture them well in the future.

While Rome Flynn’s former partner is enjoying a blissful marriage, he is focused on his career. So, major success on the way? Maybe!