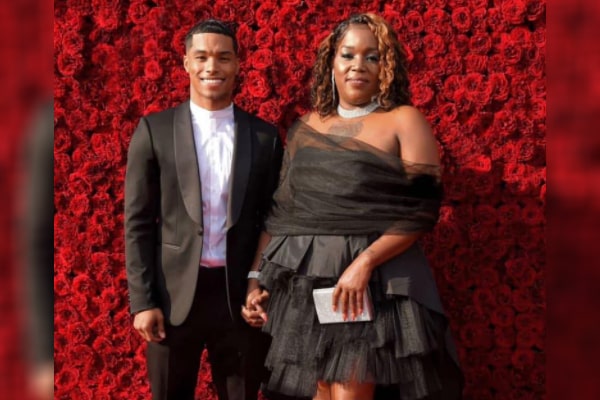 An American actor, model, and musician, Rome Flynn, is best known for his role on The Bold and the Beautiful. He won the Daytime Emmy Award for Outstanding Younger Actor in 2018 for the Bold and Beautiful.

There’s a saying that credits a strong and supportive woman behind a man’s success. In the case of Rome Flynn, his mother takes all the token along with his hard work. Flynn’s mother, Nickey Alexander, is an empath and exceptionally hard-working woman. Hence, here is everything about the powerful mother of eight, including Rome Flynn, Nickey Alexander.

Rome Flynn’s mother is an independent woman who managed to raise eight kids on her own. Currently, Nickey runs a restaurant called Nickey’s Southern Style Kitchen in Springfield.

Flynn’s mother, Nickey, partnered with Audrey Austin in 2016 and opened her food paradise. They have been providing satisfactory services to those who seek soul in the city. Furthermore, Nickey’s place was first opened in Springfield but realized the site did not reflect her personality. Thus, they moved to South Grand and settled there.

Before running a restaurant, Nickey Alexander was happy with being a convenience store manager in Wisconsin and a mother. Thankfully, Audrey encouraged her to share her gift with the world, and the rest is history.

Rome Flynn’s mother, Nickey, is famous as a chef with great foods. She further believes in keeping in touch hence receives clients’ reviews via Facebook Live.

Aforementioned, Rome Flynn’s mother raised eight kids on her own. The oldest of seven, Rome Flynn, made her a proud mom and showed her the world of glamour while his siblings show a different side of the world.

Sadly, things weren’t always sunshine in Flynn’s family as he confessed to being homeless at one point. However, she managed to turn the clock around and teach her kids to be humble and giving. In an Instagram post, Flynn appreciated his mother and her struggles. He thanked her for growing from being homeless, living in the shelter in Chicago, and raising eight kids under one roof.

Furthermore, Rome proudly gushed about his mom’s achievement as a head cook and owning a ‘best-rated food in Springfield’ and expresses his love for her.

Nickey Alexander’s son, Rome, is a known-face in Hollywood while his brother, Nino Flynn, is trying to make a name in the Hip-Hop musical genre. Likewise, Flynn’s sister, Rekeea Tynese Flynn is a self-taught make-up artist. Likewise, Alexander’s son, Steeve Wooten Jr. is a basketball player while Kartel Flynn, Wisdom Flynn, Neecole Flynn, and Love Burnes Flynn are living with their respective careers while staying away from the media scrutiny.

Since Nickey Alexander raised her kids closely, the Flynn siblings have a great bonding with one another. Furthermore, they frequently appear on each others’ social media handles. Plus Rome’s mother Nickey must also share a loving bond with her son’s daughter/granddaughter Kimiko Flynn.

Rome Flynn’s Mother Knows To Give Back

Well, Nickey not only earned food and shelter for her kids but shared them the importance of giving back. Nickey, herself, is indulged in providing to the homeless and needy via her food business.

Rome Flynn, along with his mother and business partner, Audrey, organized a free Thanksgiving meal at the restaurant’s site in 2017. The program was one of many attempts to give back to the community by the mother-son duo.

Although we hear so much of Rome Flynn’s mother, his father is not heard of. However, we do know well enough to respect the hustle of a young mother raising eight kids who did not scatter amidst the chaos but blossomed beautifully.