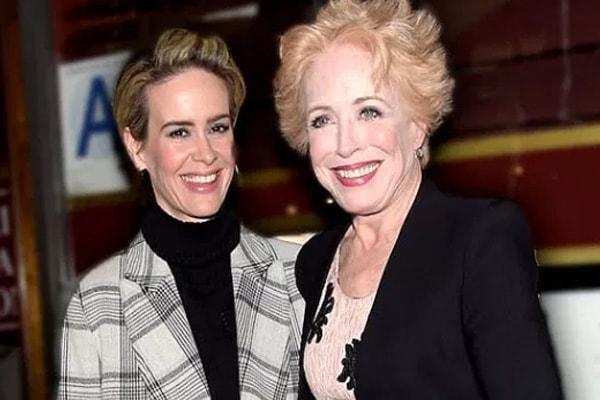 Sarah Paulson and Holland Taylor are Hollywood famous actress who have been in a loving relationship since 2015. The couple was interested in each other years before they officially announced their relationship.

Ever since the pair started their romantic relationship, they have been spotted many times out to dinner and awards show. Despite the fact, the couple’s romance has hit the headlines due to their age gap, they seem to be madly in love with one another.

Sarah Paulson is more media approach-er than Holland Taylor. She claims that her fellow partner, Sarah is the most wonderful thing that ever happened to her. They had met a lot on events like birthday parties and awards.  As they grew fond of each other, they initiated their conversation through twiiter.

Sarah doesn’t hesitate to show her love as she has even announced it on her Twitter. During Emmy awards, she mentioned her soul-mate in front of everyone.

Sarah may not care about what people think about her relationship, but she cares about her girlfriend, Holland Taylor. On Holland’s 76 birthday, she tweeted the most authentic picture of them together.

And we have to admit though, Sarah Paulson and Holland Taylor look totally adorable together.

This was the most authentic picture of us on the internet. Happy Birthday ⁦@HollandTaylor⁩ I love you wildly and forever. pic.twitter.com/aIi9NDxf9R

Sarah Paulson and Holland Taylor are also known as a gay couple like Mike Doyle and Andrew Rannells. Gay is common in Hollywood Industry but still, the couple has to face a lot of challenges from media. But both Sarah and Holland don’t seem to be bothered. However, people paid negative impression for these two couple as Sarah Paulson, 44 dates Holland Taylor her partner who is 32 years older than her.

Sarah declared that whoever thinks about the age-gap is strange and it is their problem to figure it out. Both admitted that they don’t mind it all and are enjoying each other’s company to the fullest.