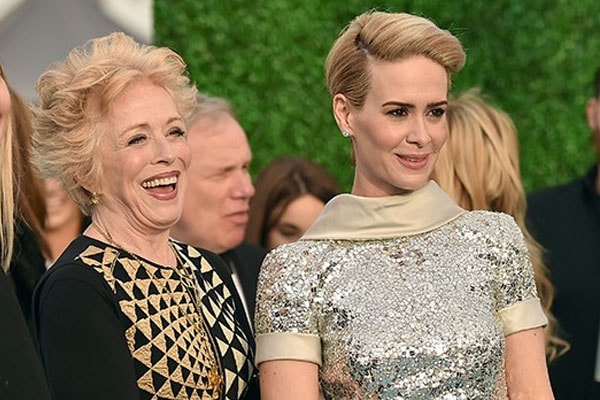 They say love has no boundaries and it has never been truer than right now in the 21st century. The power of love has transcended all the barriers of age, gender, race, and color. People can fall in with love anyone who they choose without being frowned upon. One such example is the relationship of American actors Sarah Paulson and Holland Taylor.

Sarah, who is best known for starring in movies and TV series’ like Studio 60 on the Sunset Strip and Game Change, started dating Holland in 2015. Along with their sexuality, another headlining fact about their relationship is their startling age difference. The 43-year-old Sarah is a stunning 32 years older than her girlfriend Holland, who turned 75 this January.

Holland, who played the role of Evelyn Harper in Two and a Half Men, first met Sarah way back in 2005 at a certain dinner party. She stated in an interview that they again crossed paths a few years later and exchanged messages on Twitter and went to out to dinner together. After that, they have been together and showing no signs of slowing down any time soon. With Sarah’s Net Worth of $8 million and Holland’s being $18 million, the couple has fewer stuff to worry about.

Sarah has fond memories of her first meeting with her now lovely girlfriend at that dinner party. Sarah, who was then dating someone else, thought that Holland eas the most beautiful woman in the world. The two soon became a couple and are still going strong. In a recent interview, Sarah stated that she is “absolutely” in love with Holland and will happily spend the rest of her life with her beautiful girlfriend.

Both Sarah and Taylor have been very open about their relationship and have never failed to express their love for each other. They constantly send adorable messages to each other on Twitter. They made their debut on the red carpet earlier this year in January at the Critics’ Choice Awards and it seems their love is overflowing.

Sarah and Holland’s relationship is proof that age and gender are no barriers when your love is strong enough. Sarah and Holland are in love and it is very adorable indeed.