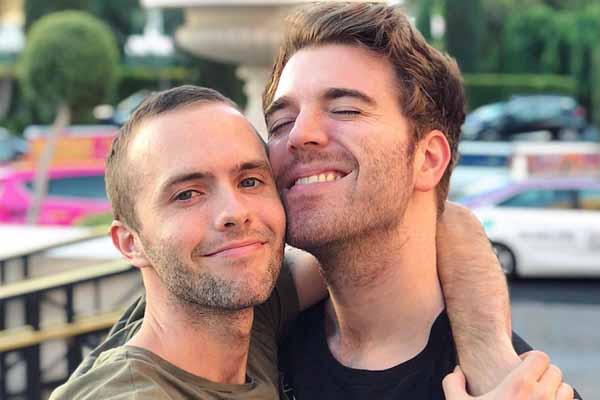 Shane Dawson‘s fiance Ryland Adams is a great partner and his soon-to-be husband. The lovebirds exchanged their engagement rings in a beautiful ceremony on March 19. 2019. Both Shane and Ryland are successful social media personalities, with millions of fans on Instagram and YouTube.

While Shane is famous as a bisexual actor, comedian, writer, director and musician, the same is not valid for his handsome fiancé, Ryland. So, here are some facts about Shane Dawson’s dating partner, turned fiancé, Ryland Adams.

Ryland Adams was born on May 14, 1991, in Denver, Colorado. His parents, Bruce Adams and Vicki Adams, are happily married for nearly three decades. Maybe, Ryland will learn the secret recipe to a successful marriage from his parents and apply it in his own life. Recently, Ryland brought tears to his dad’s eye when he gifted him his dream car!

Moreover, Ryland has been a YouTuber since 2010, and the videos on his channel are quite popular. After he started to date his current fiancé, Ryland’s popularity also increased quite a bit, and his Instagram followers exploded.

Ryland is now a well-known internet celebrity. Ryland’s relationship history is also a hot topic among fans of the gay couple.

Details of when the two first met, started dating, and even their first kiss are things people want to know. Undoubtedly, Ryland is a loving fiancé and can’t wait to tie the knot with his partner.

After dating for a few years, Shane couldn’t wait anymore to get hitched to his boyfriend, Ryland. As is tradition, people first get engaged before marrying one another. One a starry night, Shane finally mustered up the courage to propose Ryland. He also shared the precious moment on Twitter.

The pictures of the engagement quickly went viral on Twitter. The tweet boasts over 200K retweets and more than a million likes as of July 2019. Undoubtedly, the duo Shane and Ryland have God’s blessing with them. The world awaits their eventual wedding and can’t wait to gossip about marital relationship.