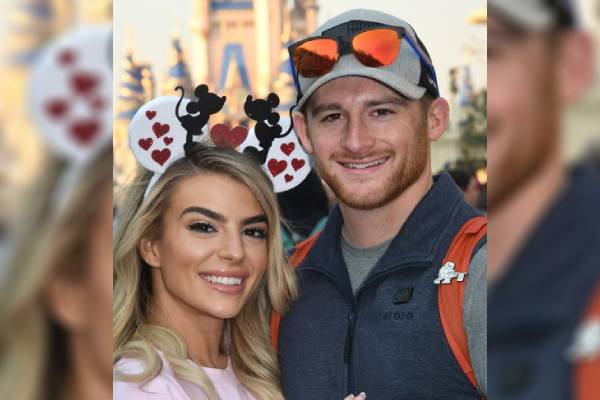 Born Shelby Steven McEntire Blackstock, Shelby Blackstock is a renowned race car driver of American nationality. He is the son of Reba McEntire and Narvel Blackstock. As one of the most successful car racers, he has attracted much media attention.

In addition, his fairytale-style wedding with his longtime girlfriend, Marissa Branch, made big headlines. Also, did you know Shelby Blackstock’s wife is a licensed esthetician? If not, let’s learn more about the racer’s beautiful spouse in today’s article.

First Met On The Dating App

The lovely pair first met on the dating app Tinder in 2014. However, they didn’t start dating immediately. During their conversation, the duo realized they knew each other through the IndyCar racing circuit. Finally, after two years of daily social media interactions, their romantic relationship started. The couple addresses their story as a “Tinderella Story.”

In an interview with People, the lovebirds shared that they became friends fast and have had a strong bond ever since. They felt like they were destined to meet and spend life together. The married duo further added that the love was always there, but they recognized it a little late.

Regardless, Shelby and Marissa are now happily together. Let’s hope their love and affection for each other continue to grow even more with each passing day.

The Blackstock pair walked down the aisle on 12 February 2022 at Walt Disney World in Orlando, Florida. As the park holds sentimental value, it has become the site for many of the couple’s most memorable milestones. Moreover, Diane Bowen and Hugh Howser and his team planned the lovebirds’ wedding with flowers by Heather Greer at the Epcot and the Magic Kingdom. Also, Shelby Blackstock’s mother, Reba, danced at the function.

Marissa and her husband first visited Disney World together in the mid-2010s. They rode Small World in the memory of her late grandmother, which left a big impression on both of them. Additionally, Shelby proposed to his partner at Epcot. As some of their happiest and most precious memories were made at the place, the decision to hold their wedding ceremony there wasn’t surprising.

The newly wedded duo are enjoying their time together. They have not welcomed any kids together yet.

Who Is Shelby Blackstock’s Wife?

Marissa was born in 1993 in Florida, USA. She holds a Health Care Administration/Management degree from Indiana University‘s Purdue University Indianapolis. Furthermore, she also previously worked as an operating room assistant at Indiana University Health Methodist Hospital. The racer’s better half also did some modeling on the side.

Afterward, the blonde beauty left her job at the hospital and enrolled at Aveda Fredric’s Institute. Eventually, she received an esthetician license. Branch is currently working as a client liaison at Gilpin Facial Plastics. Besides, she is also a famous social media influencer with over 10K followers on IG alone.

Marissa Branch Net Worth And Earnings

As mentioned above, Shelby Blackstock’s wife first worked at the Methodist hospital and later received her skin care license. Her work experience also includes serving in several dermatology and medical centers. Also, Marissa Branch’s net worth must have also benefited from her modeling jobs.

As per Comparably, a customer liaison earns an average salary of $51,635 per annum. Thus, Marissa must also make it around that range. Additionally, she also makes a considerable sum from brand endorsements. Social media influencers make around the range of $14K to $74K, and their income highly depends on their fan following.

Undoubtedly, Marissa Branch’s net worth must be massive, thanks to her multiple ventures. On the other hand, Marissa Blackstock‘s husband, Shelby Blackstock’s net worth is estimated to be a notable amount. With all the riches, the Blackstock pair must live comfortably.

Nonetheless, Shelby Blackstock’s wife is living a happy and prosperous life along with him. Not only that, she seems to be doing well in her professional life as well. We wish Marissa and her husband a lasting bond.