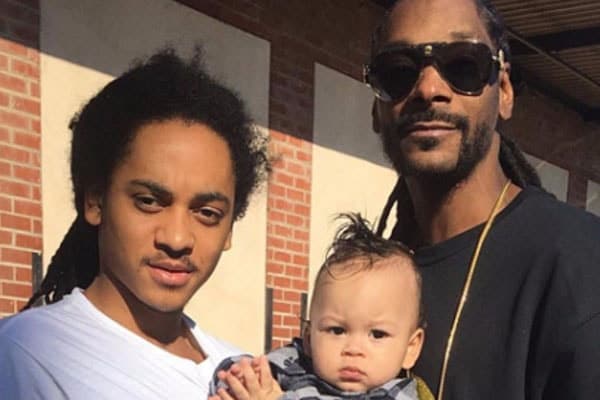 Snoop Dogg has established his name in the music scene as a badass person with a no shit given attitude which makes him a legend. Rapper Snoop is considered as one the greats in the rap industry and states he’d like like to open an ice cream parlor and call himself SCOOP DOGG when he’s not rapping. Snoop Dogg has three sons Corde Broadus, Cordell Broadus and Julian Corrie Broadus plus a daughter named Cori Broadus.

The rapper Snoop Dogg contained no boundaries of happiness when he welcomed his grandchild Zion Kalvin to the Broadus family. He took on his Instagram account to share his joy among his fans and loved ones.

Snoop Dogg’s son Corde Broadus aka Spank is yet to make a name of his own. For the time being, he is known only as Snoop Dogg’s son. No matter what though, Corde has a loving relationship with his son Zion Kalvin. Snoop Dogg’s grandson Zion Kalvin and his father Corde can often be seen hanging with one another and having a lovely father-son time.

Having a social media account is not much of a bigger deal, but someone who is just a kid, it seems surprising. Like Dania Ramirez and Bev Land’s adorable twins, Gaia Jissel and John Aether Ramirez Land, the cute grandson of Snoop Dogg, Zion Kalvin also has an Instagram account. Though Zion doesn’t use it, it probably is handled by someone elder from his family.

The rapper Snoop Dogg’s grandson Zion Kalvin has a bright future ahead. He can choose to be a football player somewhat like his father, or he can want a career in music. It is sure that Snoop will help his grandson a lot in the coming days.