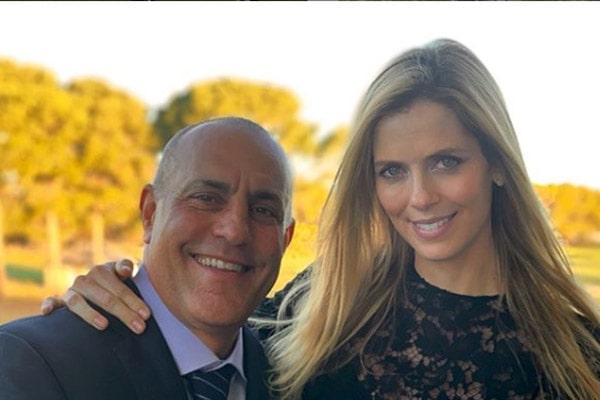 Anna Rawson is the former Australian professional golfer and model. Rawson played in high-level circuits like the LPGA Tour and LET. Although Anna played for over three seasons in her LPGA Tour, she did not get strong results. So, she chose modeling as her leading career and is doing well in it. To date, Rawson has appeared in various fashion magazines and done modeling for multiple TV commercials, and some ramp walks. However, Anna has not stopped playing golf as she believes playing golf added more to her brand and business as a model.

Talking about the personal life of Anna Rawson, she is married to talent executive Ted Chervin. The gorgeous model, Anna, is also a blessed mother to two adorable kids with her husband, Ted.

Here, in this article, know more about Anna Rawson’s husband with some extra doses of information, including their net worth.

Australia’s one of the top models, Anna Rawson, took the wedding vows with an agent at Los Angeles-based IMC Partners, Ted Chervin, on 23 June 2013. Since then, the married couple is enjoying their marital life, leaving no marks of any marital issues behind.

The current husband-wife duo, Anna and Ted, dated for a couple of years before their engagement in 2010. Chervin had proposed his love Rawson with a diamond ring in the presidential Suite of a Four Seasons Hotel in Hawai in June 2010. Then newly-engaged pair waited some years to know each other better before their marriage in 2013.

Anna Rawson’s marriage with Ted Chervin has crossed over seven years, and the love between them is still the same as they had at the beginning of their relationship. With the increasing years, their bonding is getting stronger.

The seven years long marital life of Anna Rawson and Ted Chervin has blessed them with lots of love and care. Besides, they also got the privilege to be proud parents to two beautiful daughters, Lilah Mae Chervin and Vivienne Kaye Chervin.

The eldest of two Chervin sisters, Lilah Mae Chervin, was born in 2017. She even has an Instagram account in her name operated by her parents.

Sadly Anna struggled with infertility before giving birth to Lilah. So, she hired a celebrity doula, Lori Bregman, to be her doula. Soon after welcoming her first daughter, she launched Seedlyfe with Lori to help other women struggling with infertility.

Furthermore, Anna and her husband, Ted, welcomed their second daughter, Vivienne Kaye, on 21 November 2019. She weighed 7 pounds 3 ounces at the time of her birth. The overwhelmed momma, Anna, had announced the arrival of her cute daughter, Vivienne, via her Instagram page.

Anna Rawson’s daughters often appear with their mom on Instagram and other social media pages. The gorgeous beauty, Anna, is perfectly handling her children and profession together.

Anna Rawson’s Husband Is A Founding Partner At ICM Partners

Ted Chervin is a managing director, Board Member, and a Founding Partner at ICM Partners, a literary and talent agency in the United States and Europe. Anna Rawson’s husband, Ted, oversees the day-to-day operations of the TV division’s talent, literary, packaging, international format, and business affairs unit. To date, Mr. Chervin has been able to package numerous hit series, including The Big Bang Theory, The Blacklist, Modern Family, and Two and a Half Men.

Before joining ICM, Anna Rawson’s husband, Chervin, served as a partner in Broder Webb Chervin Silbermann’s literary agency and as an Assistant U.S. Attorney in New York. Also, he serves for the Academy of Television Arts & Sciences Foundation as the Board of Directors.

Net Worth Of Anna Rawson And Her Husband

Anna Rawson’s net worth and her partner, Ted Chervin’s net worth, are yet to be revealed for the time being. But looking at their profession, one can assume both the husband-wife duo to be millionaires. The pair amassed such an impressive sum to their net worth from their successful career in their respective professions.

On average, a professional golfer gets paid slightly less than $1 million per year. Anna might have bagged similar dollars to her assets as a female golf player. Similarly, Anna Rawson also adds up some money to her fortune as a professional model. Moreover, the credit to her million dollars net worth also goes to her earnings from her brand Seedlyfe.

Furthermore, Anna Rawson’s husband, Ted Chervin, accumulated such a huge fortune from his career in the ICM Partners. He might also be involved in other businesses far from the media reach to support his net worth.

The happy couple, Anna and Ted, are currently living a lavish life with their combined fortune in Los Angeles, California.