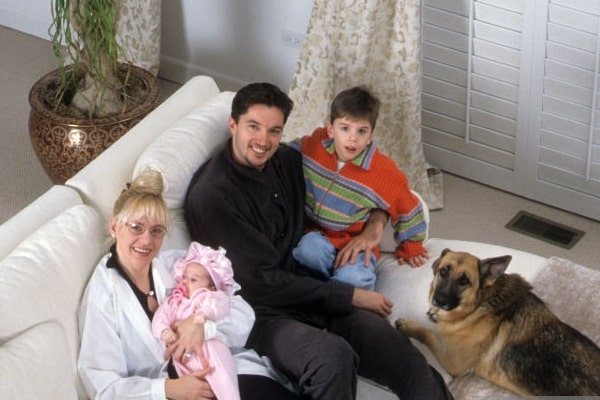 Toni Kukoč and Renata Kukoč have been together for a long time and are incredibly secretive about their relationship. Image Source: Getty Images.

Toni Kukoč is a Croatian former basketball player who enjoyed a hugely successful time in NBA. Toni, who bagged the NBA Sixth Man of the Year Award in 1996, currently serves as Special Advisor to Jerry Reinsdorf, the Chicago Bulls owner.

Along with his successful career as a basketball player, Toni Kukoč also enjoys a blissful marriage with his longterm wife, Renata Kukoč. However, Toni Kukoč‘s wife has maintained a private life. Let’s see what we have about her and their children.

Aforementioned, Renata Kukoč has maintained a secretive life. She hasn’t publicly announced her presence, and both the partners’ social media are insanely silent about their marriage.

However, Toni Kukoč ‘s partner at least posts about their children vaguely. In an interview, Mrs. Kukoc revealed her interest in fashion and told the interviewer about the wish to own a vast wardrobe. Growing up in Croatia and Germany, Renata and Toni’s relationship goes back to their high school at Split School of Chemistry and Technology.

The couple has maintained their privacy since the very start of their relationship. Although everybody knew about their relationship, even in Toni’s prime time, they had kept their secrecy very well. The couple has been married for a long time and is still in love with one another. Toni Kukoč’s wife, Renata, gave birth to two successful athletes.

The long-term conjugal of Toni Kukoč and Renata Kukoč resulted in two beautiful children. His son, Marin Kukoč, was born on July 31, 1992, at Highland Park, Illinois. Like Toni, he also pursued his passion for basketball and played for Highland Park High School. Furthermore, Marin previously played at the Full Package Exposure League before.

Toni Kukoč’s son graduated from Wharton School with a Bachelor of Science in Marketing & Economics. According to his LinkedIn profile, he previously worked as a product designer in VacayHome Connect, LLC, and currently works as Product manager since 2017. Furthermore, Marin also worked as a graphic designer at Real Integrated Technology in 2014.

Kukoč’s son, Murin, played 33 games for the 2011-12 season in Penn and averaged 2.5 points per game. Similarly, he was a member of the Croatian U19 National Team and performed at the U18 European Championship in 2012. As of now, he is continuing his life in privacy after playing basketball for a long time.

Moni Kukoč is not the only child in the family. The couple shares a beautiful green-eyed daughter, Stela Kukoč. Stela is a lovely woman passionate about volleyball and is serving as a coach in Wildcat Jrs. Volleyball Club since 2019. She also works as a teaching assistant at Glencoe Middle School.

Unlike Stela Kukoč‘s father and brother, she chose volleyball instead. Graduating from the Miami University, she played for the University’s team as Outside/Right Side Hitter. While Toni had continued to extend his legacy as a golf player, his daughter contributed to volleyball.

Toni Kukoč’s wife, Renata Kukoč, has posted about her children multiple times via her Facebook, but Toni is entirely about his portfolio of his creation of “edited pictures.”

Let’s hope the Kukoč family continues to shine in the coming days and remain happy.