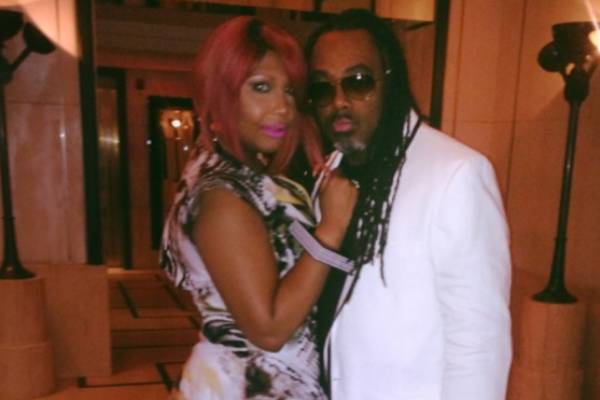 Traci Braxton and her husband Kevin Surratt were together for more than two decades. Image Source: Kevin's Instagram.

Traci Renee Braxton, aka Traci Braxton, was a famous American reality television star, singer, and radio personality. Unfortunately, she passed away on 12th March 2022, just at the age of fifty. The younger sister of popular singer/songwriter Toni Braxton is best remembered for her song, Last Call, from her solo debut album Crash & Burn. The song reached number eleven on the Billboard R&B Albums relaunched list.

Apart from her music career, Traci also starred in the reality TV show Marriage Boot Camp with her spouse. She was married to her spouse Kevin Surratt. The couple had been together for more than twenty-five years at the time of Braxton’s death.

So, in today’s article, let’s get to know about Traci Braxton’s husband, Kevin Surratt. What does he do professionally?

Kevin Surratt and Traci Braxton were friends when they first met each other. After their first meeting, the lovebirds fell in love with one another and were married until Traci’s tragic passing. The couple tied the knot on the 31st of August 1996.

In September 2021, the pair’s only biological son, Kevin Surratt Jr., posted a picture on his Instagram. Kevin Jr. congratulated his parents on their 25 years of togetherness. Furthermore, he expressed his love and gratitude towards his mother and father on their auspicious day.

Even though the pair has been together for more than two decades, their relationship hasn’t been a smooth ride. The couple faced adversity and infidelity during their marriage. As a result, they featured on the reality series Marriage Boot Camp to display the unseen side of their marriage to the viewers.

Although they had fights and arguments on the show, the pair were tipped as the favorite couple by their audience and media. The show also featured three other reality show couples.

Also Read: Get To Know About Omar Sy’s Wife

Traci Braxton’s husband, Kevin Surratt, has three children. However, Traci has given birth to only one of them. Kevin Surratt Jr. is the only biological child of the couple. He was born on 10th January 1996, one year after his parent’s marriage.

Furthemore, Kevin Surratt’s son is married to his beautiful wife Olivia Haaron and has a son Kevin Surratt Jr Jr, aka KK3, together. Well, it is clear that Kevin Sr. is a grandfather now.

Apart from Kevin Jr., are Traci’s spouse’s children from another woman or his past relationships? Well, that is not the case. The couple is parents to the three kids together. However, the other two children have been kept away from the media by Surratt and his wife.

Furthermore, they are not Traci and Kevin’s biological children. But, the lovebirds have not revealed whether they are adopted or born via different measures. In addition, the pair has not revealed any identity or information about their two children.

Talking about Kevin Surratt’s parents, he was born into a military family. His father served in the army and was a U.S. veteran. However, he was raised by his mother as a single parent. Traci Braxton’s spouse also had a younger brother who unfortunately passed away when he was still a child.

Nevertheless, Kevin still takes pride in his family’s culture and heritage. He often posts his elder’s pictures on his Instagram account, giving tributes to them.

Kevin Surratt is an actor and producer. He has two acting credits under his name on IMDb. As mentioned above, Traci Braxton and her husband appeared on the reality show Marriage Boot Camp. Besides the series, Kevin has appeared on the morning talk show called Great Day Washington. He attended the program to promote his upcoming reality talent show, Here Comes The Champ.

Traci Braxton’s husband, Kevin Surratt, was the co-producer of the show Here Comes The Champ alongside other famous personalities like Thomasina Perkins, Bernhard Brown, and Qadree El-Amin.

Apart from these shows, Kevin has not been in the buzz among the media regarding his work. However, due to the sudden demise of his wife Traci Braxton, his name has been circulating in the news. In this difficult moment of time, we wish the Braxton and Surratt family all the strength and courage.