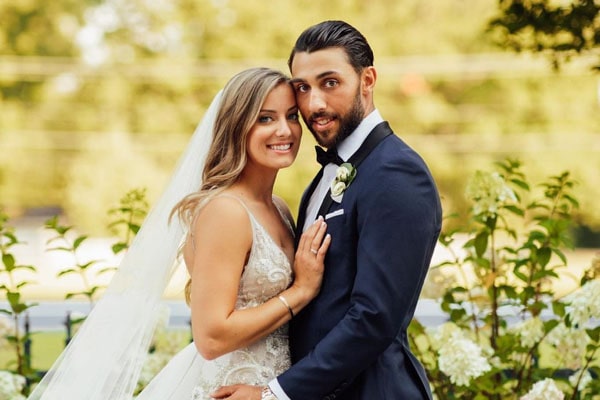 Vincent Trocheck is one of the trending professional ice hockey players who has been making headlines for some years because of his professional achievements. Besides, lately, his personal life is also gaining considerable attention from the public and media people. Many are curious to peek inside the family life of Vincent Trocheck, including his wife, Hillary Trocheck, aka Hillary Case.

So, today, from this article, we give you a glimpse at Vincent Trocheck’s wife, Hillary Trocheck, and her blissful marital life with the celebrated hockey star.

The current hockey player for the Carolina Hurricanes in NHL, VincentTrocheck’s wife, Hillary Trocheck, is currently a full-time Operations Project Manager at Voltus, Inc. She joined the company in January 2020 after leaving her job as a Remote Associate from Rivvly.

Before joining Rivvly and then Voltus, Inc., Hillary Trocheck worked at Ford Motor Company for two years and three months. Initially, she joined the Ford Company’s Dearborn, Michigan wing in June 2015 as an IT FGC Dealer System Strategy – Business Analyst. After working at Dearborn till June 2017, Mrs. Trocheck got transferred to the company’s Allen Park wing, where she served as an IT Innovation Analyst till August 2017.

Furthermore, Hillary Trocheck also provided her service in some other organizations like US Imaging and Rockwell Collins. She served as a Production Technician in the US Imaging and as an IT Sales & Customer Management Technical Intern in the latter one.

Hillary Trocheck is a graduate of Central Michigan University. She completed her Bachelors of Science in Business Administration and Information Systems from Central Michigan in 2015. The same year she also gained her ERP 6.0 EHP5 (TERP10) certification from Associate Business Foundation & Integration with SAP.

You might be surprised to know that Hillary Trocheck and her current husband, Vincent Trocheck, are high school sweethearts. Vincent met Hillary after he relocated to Michigan in high school to play Juniors hockey. They attended a few classes together and eventually fell for each other. However, after dating for a while, the two went separate ways for their further studies.

But, Vincent and Hillary were destined to be together. So, after Post-graduation, when Hillary was serving for Ford Motors, she traveled to Pittsburgh for a conference. It just so came up to be where her love, Vincent was also at the time. So, Hillary approached him and asked for a cup of coffee with him which he accepted instantly. And, the rest is history.

After Hillary Trocheck and Vincent Trocheck reconciled, they started living together in Florida. Soon after the couple continued their incomplete love story, they welcomed their first child, son, Leonardo Trocheck, on 27 June 2018.

Similarly, the beautiful married pair, Vincent and Hillary, are also proud parents to a daughter, Lennon Trocheck. They gave birth to their little princess, Lennon, on 17 October 2020. The overwhelmed momma, Hillary, had announced the birth of her baby girl via a post on her Instagram page.

As registered on the Knot, Hillary Case officially became VincentTrocheck’s wife on 27 July 2019. The adorable pair took their wedding vows before their close friends and family members from all over the country at Nemacolin Woodlands Resort.

Furthermore, talking about their big day, Hillary looked stunning in a wedding dress created by Berta-Bridal Beginning, Pittsburgh. While walking down the aisle to Vincent, she carried their firstborn, Leonardo, a gesture her husband had no idea was coming.

Well, Hillary surely does know how to surprise her man and make him feel special in every way.

So, since 2019, Vincent Trocheck and Hillary Trocheck have been together as husband and wife and rejoicing their marital bliss. Moreover, they have their two adorable kids who are adding happiness in their life. We hope to see this couple tied in a knot of love for eternity.