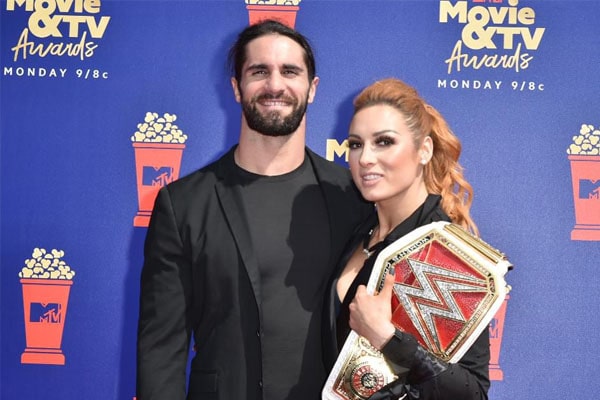 Colby Daniel Lopez aka Seth Rollins is not yet married but is currently engaged to his soon to be wife Becky Lynch. The pair shared that the couple started dating in February 2019 and that they didn’t really keep it much of a secret.

There are a lot of things common between the pair. Both Seth Rollins and Becky Lynch are two music lovers and can be often seen attending many rock concerts and metal shows together. They went out publicly to concerts and were friends for years.

The WWE pair who had been friends for many years confirmed their relationship shortly after WrestleMania 35.

In February, WWE pair Rollins and Lynch started dating and became one of WWE’s most exciting power couples ever. The gorgeous couple can be often seen on each other’s social media account. The also companied one another during the WWE Hall of Fame Ceremony.

WWE superstar Seth Rollins is engaged to his fiancé Becky Lynch. Becky announced the news on Instagram sharing a photo of the couple posing on a beach. As well Lynch was wearing an engagement ring on her left hand.

As per Barnburner Radio Network, Becky Lynch opened up about her relationship with her soon to be husband Seth Rollins. The romantic couple loves to spend the time on both on and off-screen. It seems the couple is so much in love with each other.

Past Relationship of Seth Rollins and Becky Lynch

The 33-year-old Seth has dated a number of famous women during his career. He even dated women who were involved with the WWE. Seth’s first girlfriend was Leighla Shultz. Their relationship lasted for three years and then decided to part ways. After posting some leaked photos, their relationship came to an end.

After being separated from his first girlfriend Leighla. He dated a gorgeous lady Sarah Alesandrelli who was a bartender by profession. As of Becky, she was previously dating a fellow named Jeff Dye. She was also linked to UFC fighter Luke Sanders.