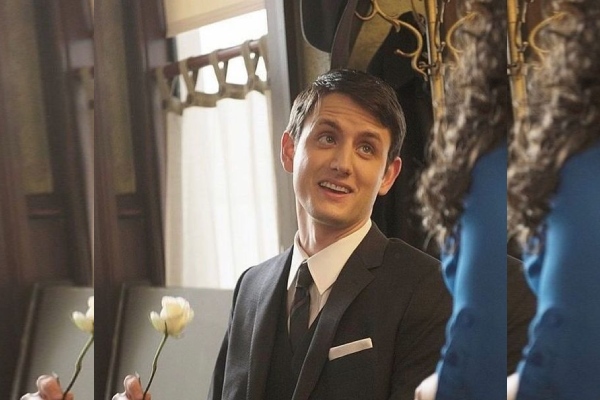 The character Gabe Lewis played by actor Zach Woods has a quite weird relationship with Erin in The Office. How is he in the real life relationship? Read the whole article to know about his wife/ lover. Image source: Social media.

Zach’s comedy is almost known to most people but his personal life remains almost hidden. If you are one of those Zach Woods fans who would like to know more about this amazing actor’s personal life, you are in for a treat. Zach had a weird relationship in The Office, so let’s take a look at his real-life relationship by digging a bit about Zach Woods’ wife.

Who Is Zach Woods’ Wife?

Zach Woods’ character Gabe had a weird relationship with Erin in the show The Office. The couple initially dated to further increase the tension between Andy and Erin but Gabe started harassing Erin and it certainly did not end well for him. In the real-life, however, Zach Woods is a completely different person. With a charming personality, Zach melts away the heart of the audience.

You might be eager to know who Zach Woods’ wife in real life is but the only bummer is he is not married yet. On the bright side, he is in a relationship with his longtime girlfriend Karley Sciortino.

So, let’s take a look at Zach Woods’ girlfriend and see how their relationship is going.

Zach Is In A Relationship With Karley Sciortino

Zach is a private guy and has not publicly spoken about his girlfriend being Karley Sciortino. But, that being said he has mentioned numerous times that she is a host for a documentary series where she explores some weird sex acts and tries to remove the taboo nature of them. From the hints, it was only a while before the Sherlocks of the media found out who he was referring to.

Zach Woods’ girlfriend Karley is the host of a Viceland documentary series called Slutever. She is also the founder of a website under the same name. The second season of the series aired in 2019 and features Karley as the host. Zach and Karley both are quite secretive about their relationship and they will likely keep it that way. As Karley is preparing for her next season, Zach is focusing on his next role. We fans really can not wait for Zach and Karley to officially announce their relationship.

Is The Couple Planning For Marriage?

In an interview with The Late Late Show with James Corden, Zach mentioned that he recently moved in with his girlfriend. Although he did not mention exactly it was Karley, he spilled enough beans for the fans to uncover that. The interview happened in 2018 and the couple has been living together for almost two years now. So, we might soon see Karley becoming Zach Woods’ wife from his girlfriend. Both of them seem to spend quality time with each other quite often and they definitely make a cute couple.

Zach Woods’ girlfriend Karley has been incredible as the host of Slutever. She will likely keep performing great as she gets all the support from Zach. The only thing that remains is the couple to be hitched. Let’s hope that happens soon.