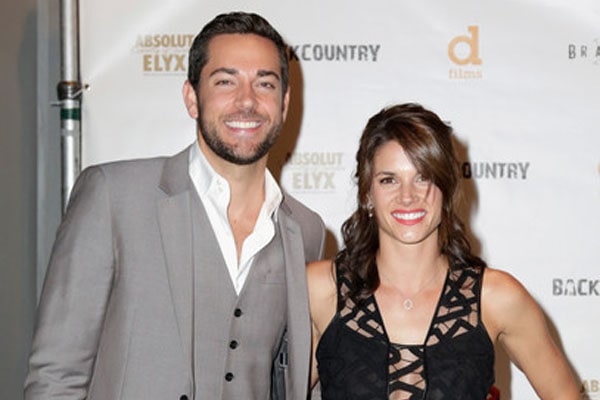 Zachary Levi and his ex-wife, Missy Peregrym were married for 10 moths only. Image Source: Zimbio.

The sweet marital relationship of Zachary Levi and Missy Peregrym came to an end just after ten months of being together. The ex-couple secretly tied the knot on June 14, 2014, in Hawaii, and they were living happily.

The Rookie Blue star, Missy Peregrym, was the one who filed for divorce in December of 2014. They were only married for six months at the time being. Zachary and Missy officially separated on April 6, 2015. Let’s find out what the reason was behind the ex-couple’s divorce.

The news about Chuck star, Zachary Levi splitting with Missy Peregrym shocked everyone as much as the news about their secret wedding shocked the world. Just after six months of their marriage, the ex-couple decided to go on their separate ways. The former couple who secretly married in Maui, Hawaii, must have a secret reason for their separation.

Both Zachary and Missy have not opened up about the reason for their divorce to date. However, Missy stated irreconcilable differences as the reason for the divorce in the document filed on April 6, 2015, as per E! News. She also claimed that neither of them needed spousal support, and they didn’t own any property together.

Whatever the reason, it appears that the divorce marked the end of a pretty long courtship for Levi. After that, fans even wondered if he was quietly dating his Chuck co-star, Yvonne Strahovski. But Strahovski went on to marry her long time boyfriend, Tim Loden, in 2017 and have a kid together.

The Reaper star, Missy Peregrym, surprised the fans yet again with her secret marriage to Australian actor, Tom Oakley. It seems like she loves to marry secretly. Perhaps Missy Peregrym does not want to create unnecessary rumors in the spotlight too.

Well, this time, she did not hesitate to post their wedding picture up on her social media. It’s nearly been five years that she and Zachary Levi divorced, and she has already found the love of her life, Tom.

Well now, fans are only eager to know if Zachary has any plans to get married in the future. All of his fans wish to see him settled down for a long-lasting relationship. It’s unclear if the actor is dating at the moment or not, but he’s become more secretive about his love life for sure. It looks like he is focusing right now just on himself and his career.