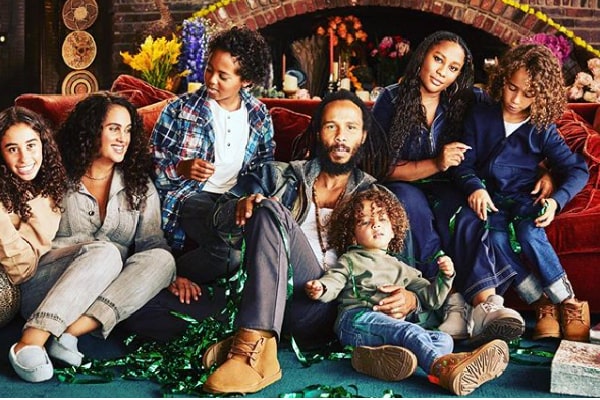 Coming from an iconic family background makes it hard for the generation to maintain their parents’ legacy. However, many successfully climb up and shine brighter like reggae icon Bob Marley‘s son, Ziggy Marley, with Rita Marley. Ziggy is a musician and philanthropist who released eight studio albums with the family band, Ziggy Marley and the Melody Makers.

Since it’s the Marley family, people always had keen eyes on them, but their music grew the fanbase. Therefore, here we are trying to let you more into Ziggy Marley’s family. Here, we shall mention Marley’s seven kids with different baby mamas. So, hold your soul to get blown by Ziggy Marley’s baby mamas.

The Marley family is known for sharing love and spreading Rastafari. Previously, Bob Marley welcomed kids with nine baby mamas, all while living a healthy life, and now, his kid, Ziggy, is set to keep up with the tradition.

Ziggy Marley is a proud father of seven kids by 52 with three different baby mamas. His first relationship with Lorraine Brogle blessed him with two exceptionally talented kids, Bambaata Marley and Justice Marley.

Love is lucid when two people acknowledge one another’s presence. The feeling gives birth to another soul, and the world has been running in that manner. Following the ritual of love, Ziggy Marley, too, welcomed two kids from his relationship with Lorraine Brogle.

Though Ziggy Marley’s baby mama, Lorraine, is leading a private life, she raised her kids, Bambaata Marley and Justice Marley, proudly. Marley’s oldest son, Bambaata, and the Jamaican singer/songwriter was born on July 12, 1989, in Kingston, Jamaica. He spent his early years in Jamaica before moving to Miami.

As of now, the hardworking singer, Bambaata, is living comfortably in LA, California. Furthermore, he seems to love his mother, Lorraine, who, according to his post, lost vision recently.

The former couple welcomed their second kid, Justice Marley, on December 9, 1991. She is pretty creative and has pursued a career as a wardrobe stylist. Furthermore, Justice is a successful entrepreneur who started More Justice.

Ziggy Marley’s oldest kids, Bambaata and Justice, are pretty close to not just themselves but Zuri as well.

Aforementioned, Ziggy Marley is a father of serve kids with three different baby mamas. His third child, and second daughter, Zuri Marley, was born on October 28, 1995, from his relationship with Carlene Samuels.

Ziggy Marley’s ex-partner, Carlene, is a thriving creative producer and director. Besides having a decent career, she loves to travel, yoga, food, social activism, and her work allows her to practice all of it.

Similarly, Marley’s daughter, Zuri, decided to follow her father’s footsteps and decided on making a career in music.

Jamaican singer Ziggy Marley is a family man. He is a proud father of three mature kids and is raising four more with his wife, Orly Marley. She is of Israeli-Jewish descent. She further acted as the vice president for the William Morris Agency.

The family of six live in complete harmony, enjoying the best of their lives. Furthermore, they also play several games, and Ziggy posts appreciation posts on his social media handle occasionally.

Similarly, there is nothing more beautiful than family members taking care of one another, and Marley’s daughter, Judah, helps him take care of his dread. Given that dread hair has great traditional values, it must have felt like a blessing to have taken care of them by his daughter.

All Seven Siblings Come Together To Celebrate Their Family

Although Ziggy and his former partners, Lorraine and Carlene, have moved on with life, it is unknown if they maintain a close relationship. However, all seven siblings are pretty unique to one another.

They further enjoy festivals together and have strict rules while playing UNO. Yes, rules! The Marley family has managed to earn a comfortable life as an accomplished singer and businesspeople.

Let’s hope the family-bond continues and enjoys the family moments together.