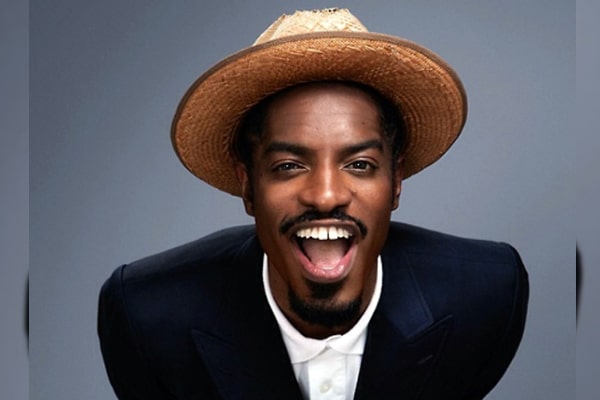 Andre 3000 earned multimillion and a massive reputation via his diverse career as rapper and actor. Image Source: Outkast's Instagram.

Andre 3000 from Outkast is known for his music alongside another prominent figure, Big Boi. But that’s not it; having been dating the Neo-soul queen, Erykah Badu, at the height of their respective careers and welcoming a son together heightened his popularity.

Despite the highly publicized relationship, Andre 3000 is a highly-highly talented rapper and wrote several hits, including Mrs. Jackson. Therefore, he has gained a massive reputation for his contribution to hip-hop.

Furthermore, Andre 3000’s net worth has increased equally since his musical debut in 1992. Thus, let’s look into his musical earnings and other ventures.

According to Celebrity Net Worth, Andre 3000’s net worth is estimated at $35 million. Thanks to his multi-faceted career as a rapper-cum-actor, and fashionista, he has earned massive fame and wealth at the same time.

Andre is arguably one of the greatest rappers of all time. Furthermore, his baby mama, Erykah Badu, whose net worth is $10 million, claims to be his biggest fan and has rightfully earned every penny. On the other hand, his hip-hop partner, Big Boi’s net worth is estimated to be around $30 million. Here, let’s have a closer look into his earnings from his different ventures.

The Atlanta-based rap duo Outkast was formed in 1992. Andre 3000 and Antwan Patton, aka Big Boi, together made a revolution incorporating their own unique spin on melody and rap.

The former high school friends formed the band and recorded their debut single, Player’s Ball, which later became no. 1 on the rap charts and stayed there for six weeks certifying gold and became the perfect foundation for an entire release.

Likewise, Outkast was signed to the Atlanta-based LaFace & released their debut album, Southernplayalisticadillacmuzik, in 1994. The album hit the Top 20 the year it was released and was certified platinum a year later.

Outkast’s 2000 album, Stankonia, launched their stardom with hits like Ms. Jackson and B.O.B that put the duo into the triple-platinum status. Likewise, Hey Ya and The Way You Move only set the rap duo’s superstardom via 2003’s Speakerboxxx/The Love Below.

By 2006, Andre as Outkast had released six albums. Thus, after their sixth album, Idlewild, the pair broke up and briefly reunited in 2014. Hence, as an Outkast, Andre 3000’s net worth had proliferated quite impressively.

Also, Andre and Big Boi share the income from their OutKast merch listed below, along with their respective prices.

Besides, Andre also pursued a solo career which added more to his bank account.

As mentioned earlier, Andre 3000’s estimated net worth is at $35 million.

After a hiatus from Outkast, Andre Benjamin, aka Andre 3000, returned to rapping in 2010. He appeared on various remixes, including Walk It Out, Jay-Z‘s 30 Something, etc. The rapper and record producer Andre 3000’s contributions to original songs included UGK’s International Player Anthem, Big Boi’s Royal Flush, Fonzworth Bentley‘s Everybody, etc.

In 2018, Benjamin released two surprise songs from his SoundCloud account, Me& My (To Bury Your Parents). Along with the song, he released a 17-minute instrumental track, Look Ma No Hands, that featured Andre on bass clarinet and James Blake on piano.

Likewise, Andre co-wrote and featured on Come Home, the first track on Anderson .Paak‘s album, Assume Form. Although Andre has worked with several artists and a couple of solo songs for his parents, he’s never released a solo album.

While talking to Rolling Stone, Andre revealed that he’s no longer focusing on music and will probably never release a solo album. As of now, Andre is solely dedicated to his acting career and is enjoying his 40s.

Besides making several musical contributions to tv series like Malcolm & Marie, Ballers, The Great Gatsby, etc., he has also given face to several tv series and voiced a few characters.

According to Andre 3000’s IMDb, he has a couple of acting credits. Some of his credits include Dispatches from Elsewhere, American Crime, High Life, Jimi: All Is by My Side, The Shield, Semi-Pro, About a Girl, Class of 3000, Revolver, Four Brothers, Be Cool, etc.

Besides acting, Andre has also lent his voice in a few movies. Some of the credits include Class of 3000, Charlotte’s Web, L.A. Rush, Volcano High, etc.

Hence, Andre 3000’s earnings from movies and voice acts also help his net worth double. But that is not it; Andre Benjamin is not limited within his musical blessing and acting career.  Except for writing lyrics, making music, and appearing in movies, Andre 3000 has made a trademark for his unique fashion sense. Thus, he launched a 30s college football circa-inspired clothing line named ‘Benjamin Bixby’ clothing line in 2008.

Rapper Andre 3000’s massive net worth has enabled him to afford the luxury. Hence, he lives in a posh estate and drives some of the most expensive and flashy cars. Some cars that made it to Andre’s car collection include Cadillac Escalade, Porsche Carrera GT, etc. The sleek vehicles and their exotic features suit Andre the most, and one can expect them to cost a lot as well.

Well, Andre 3000’s business instincts have earned him multi-million from a couple of his real estate properties. Therefore, his net worth will probably hike some more in the future.

Andre 3000 has his own way of giving back to the world. During the revolutionary Black Lives Matter in 2020, he launched a new line of shirts to raise money for the movement.

I want them all pic.twitter.com/dMP0rfpTNK

Besides, Andre is also a massive animal rights supporter and is involved with a few organizations. Thus, Andre 3000’s net worth is enormous indeed, and it continues to rise, thanks to his continuous work as a writer, record producer, actor, and rapper.