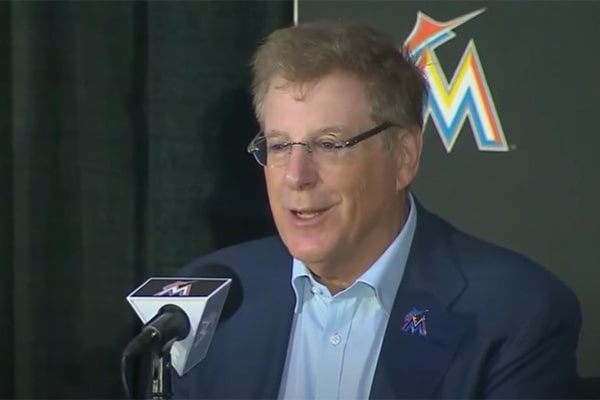 Bruce Sherman's net worth includes his income as a businessman and as the primary owner of Miami Marlins. Image Source: Social Media.

Bruce Sherman, an American businessman, is co-founder of the wealth-management firm Private Capital Management. Moreover, he is also known as the chairman and majority owner of the Miami Marlins of Major League Baseball.

Being the owner of one of the favorite MLB teams, Bruce has received lots of fame. Moreover, with such a successful career, he must have made a good fortune. Furthermore, many people must be curious to know how much the well-known businessman has earned.

So, through this article, let us find out about Bruce Sherman’s net worth.

Bruce Sherman Net Worth And Earnings

As a successful businessman, Bruce must have earned a large sum of money from his career. Moreover, even though Bruce Sherman’s net worth has not been revealed yet, Miami Herald has addressed him as a billionaire.

Income As A Businessman

Bruce launched Private Capital Management (PCM) in 1986 and sold the firm to Legg Mason in 2001 for $1.4 billion. Furthermore, he has also worked as Chief Executive Officer of PCM and has led the firm to the first ranking in the country as measured by Nelson’s “World’s Best Money Managers” for the ten years ending December 31, 2005.

Furthermore, PCM grew to $4.4 billion in assets under management in 1999. In 1997, the firm sold International Dairy Queen (1997) to investor Warren Buffett for $585 million. Even after selling PCM, Bruce sold two additional companies to Buffett: Shaw Industries in 2001 for $2.1 billion and Garan (the maker of Garanimals) in 2002 for $270 million.

Furthermore, Bruce is currently working as the Chairman and Chief Executive Officer of M4 Capital. Hence, it is not surprising that Bruce Sherman’s net worth is in the billions. Similarly, there’s no doubt that he will be earning more shortly.

Also Read: Cesar Millan Net Worth And His Earning Sources

With such a thriving career, Bruce Sherman must be living a very luxurious life with his wife, Cynthia Sherman. In addition, he has owned a penthouse in Naples, Florida, since 2003. However, the baseball team owner has listed the 12,050-square-foot house for $18.9 million in 2020.

Moreover, Bruce has also purchased the Majestic, a 200-foot luxury yacht worth an estimated $70 million, in 2010 for $69 million. The vessel was initially delivered to Nancy Walton Laurie, nephew of Walmart founder Sam Walton.

Additionally, as per Miami Curbed, Majestic charters for between $455,000 and $490,000 per week and includes a cinema, gym, and an array of water toys. So, Bruce must earn a considerable sum through his yacht.

Having amassed a fortune from his successful business dealings, Sherman has made an effort to give back to society. Bruce and his wife, Cynthia, are founders of the Bruce and Cynthia Sherman Charitable Foundation. In addition, the foundation supports a variety of charitable and philanthropic causes, including childhood development, advanced medical research and education, and the performing and visual arts.

Moreover, both of Bruce Sherman’s daughters, Lori Shaer and Randi Stanley, with his first wife, Marlene Bluestein, suffer from Crohn’s disease, so he and his wife eventually developed a foundation to support research into the condition to find a cure. Every year, they host a fundraiser designed to be the primary source of financial support for the organization.

Furthermore, the annual Sherman Prize honors exceptional and pioneering achievements in Crohn’s disease and ulcerative colitis. Thanks to Bruce’s successful career as a businessman, he can do so many charitable works.

We hope Bruce Sherman continues to find immense success in his professional career. We also wish him all the best for the future.