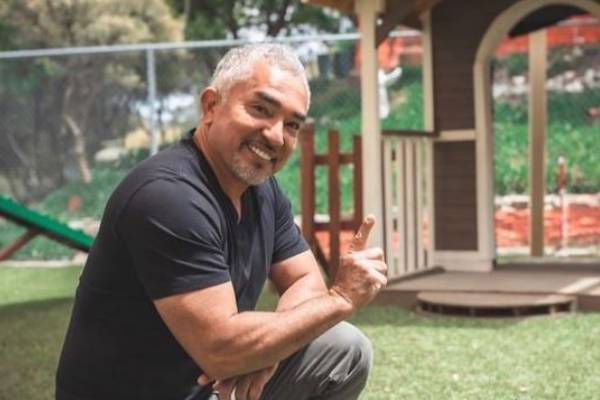 César Felipe Millán Favela aka Cesar Millan is a Mexican-American dog trainer and television personality. With more than 25 years of experience as a canine professional, Millan has gained massive fame due to his television series Dog Whisperer with Cesar Millan. Apart from being a successful dog trainer, he is also an author and has also worked in different fields.

Cesar has been working as a dog trainer for quite a long time now, and he has become enormously famous for his work. But how much has the well-known dog trainer earned from his career?

Let’s find out about Cesar Millan’s net worth and his earning details.

Cesar Millan Net Worth And Earnings

As a successful dog trainer, the Mexican native has undoubtedly made a considerable fortune to his name. Moreover, according to The Richest, Cesar Millan’s net worth is estimated to be $25 million.

Has Earned Massively As A Dog Trainer

Born in Mexico, Cesar grew up working with animals on the farm in Sinaloa, where his grandfather worked as a tenant farmer. Since he was surrounded by animals, it is no surprise that Millan pursued a career in animal rehabilitation.

The dog trainer had illegally crossed the border into the United States at the age of 21 and ended up in California. After coming to the USA, his first-ever job was in the pet industry at a dog grooming store. He met actress Jada Pinkett Smith soon after and confided her about his dreams of working with animals on television.

Cesar opened the Pacific Point Canine Academy after gaining work experience at the dog grooming store, where Jada became one of his earliest clients. She also helped him get a tutor to teach him English and supported his dreams of opening his own dog training center.

Then Millan established the Dog Psychology Center in Los Angeles, California. It specializes in large breed dogs. He moved the center to Santa Clarita, California, in 2009. With the center’s success in California, he opened a clinic in Davie, Florida, at the Country Inn Pet Resort.

Cesar Millan must have made a considerable income from these centers.

Cesar Millan Has Earned From Entertainment Industry Too

Cesar Millan is not only engaged in the dog training profession, but he is also involved in the entertainment industry. He has starred in different shows and television series related to his profession. He caught the attention of MPH Entertainment, Inc.’s producers after the Los Angeles Times ran a profile on him in 2002.

Millan and the producers began working together to develop a pilot of a television series, Dog Whisperer. The reality tv show follows Cesar as he works in dog rehabilitation, and it premiered on the National Geographic Channel in September 2004. Later, it moved to the Nat Geo WILD channel.

The show became a huge hit, and during its first season, it also became the number 1 show in National Geographic. Because of its popularity, the show ran for nine seasons until September 2012. It also became an international hit after it was broadcasted in 80 countries around the world.

Most of his shows have gotten good reviews and have helped increase Cesar Millan’s net worth.

Has Earned From Writing Books

In addition to hosting television series, Cesar Millan has also co-authored books with Melissa Jo Peltier. Millions of copies of his books have been sold just in the United States. It shows the popularity that Millan and his work have gained over the years.

Here are some of Cesar’s books, along with their prices, as per Amazon.

Several people have loved his books, and three of them also became the New York Times bestsellers. Furthermore, he reportedly earned $2,600,000 in 2009 from the book sales alone. Thus, there is no doubt that Millan’s multi-million dollars fortune has been impacted by his book sales.

Besides the work mentioned above, Cesar has also made a good income from several other ventures. Because of the popularity that he has gained from the shows he hosts, Millan was able to try his hands in different other ventures.

In 2009, the well-known dog trainer launched his own magazine, “Cesar’s Way,” in Canada and the USA. The magazine, where he served as the Editorial Director, covered his advice and the relationship between humans and dogs. In 2014, its last issue was published.

Cesar then started Cesar Millan Live!, an international tour featuring stage performances and dog training lectures. In 2008, he released his own line of branded merchandise, Dog Whisperer, by partnering with the American pet retailer PETCO. It featured several goods like organic dog treats and food, grooming products, toys, and accessories.

In addition, the famous dog trainer also has a YouTube channel named Cesar Millan. It has 1.98 million followers, and as per Social Blade, Cesar earns $1.5K to $24K per month and $18K to $287.6K per year from his channel.

Cesar also established the Cesar Millan Foundation, which is dedicated to childhood education through animal connection. The foundation rescues animals, treats them, and even organizes youth camps and several training programs.

Thus, Cesar Millan has not only earned considerably from his multiple business ventures but has also given back to society.

Although Cesar has earned a massive fortune to his name, a dent was made in his net worth due to the expensive divorce settlement. He was married to Ilusion Millan for 16 years, having tied the knot in 1994. But their marriage did not have a happy ending.

The duo had previously separated after the birth of their first child but had reconciled. Furthermore, in March 2010, Cesar’s wife had planned to divorce him. Upon learning that, Millan attempted suicide.

A few months later, in June 2010, Ilusion eventually filed for divorce, which was finalized two years later in April 2012. According to the documents, Cesar had to pay $400,000 to his wife as a one-time payout.

However, that’s not the only payment that he made to his ex-wife. He was also ordered to pay $23,000 in spousal support along with $10,000 in child support despite sharing custody of their two sons.

As mentioned earlier, the divorce settlement might have made a dent in Cesar Millan’s fortune, but with continued professional success, his wealth has recovered. And now, Millan is a multi-millionaire who has $25 million to his name.

He Was Accused Of Covering Up His Dog’s Attacks

In 2017, Cesar’s pit bull, Junior, allegedly attacked an athlete, Lidia Matiss, leaving her unable to compete in the USA Gymnastics Junior Olympics Programs. Furthermore, she claimed that the dog killed Queen Latifah‘s dog years ago, which he tried to cover up.

According to Lidia, the pit bull attacked her when she went to her mother’s office building in Van Nuys, CA, which she says is owned by him. According to her, she encountered the dog who was roaming the halls unleashed and unsupervised. She added that she could not compete in the competition due to the extreme pain from the bite.

Moreover, Matiss stated that, even after knowing the violent behavior of his dog, Cesar allowed the dog to roam free. She claimed that the dog had bitten several people and has mauled different dogs, including Queen Latifah’s dog.

According to the lawsuit, Cesar’s dog mauled one of Latifah’s dogs when she had brought them to Cesar’s Dog Psychology Center in Santa Clarita, CA. Lidia claimed that he covered it by ordering his staff to tell her dog was hit and killed by a car.

Furthermore, Millan filed an answer to the lawsuit, where he claimed that Lidia was negligent, and she assumed the risk of being bitten cause she knew of the danger.

If the things claimed by Lidia in the lawsuit are true, then Cesar might end up losing a considerable sum in addition to his credibility as a dog whisperer.

As mentioned earlier, Cesar Millan’s net worth is estimated to be $25 million. He is undoubtedly living a comfortable life with his fiancee, Jahira Dar, and two sons, Calvin Millan and Andre Millan. Cesar got engaged to Jahira in April 2016 and looking at his fortune, the dog whisperer must have presented an expensive ring while proposing to his then-girlfriend.

In April 2017, Cesar bought a home in Encino, California, for $2.8 million. In March 2017, he had sold his previous home in Studio City, California, for $1.8 million. Looking at the price tag of the house he owns, it is clear that Millan and his soon-to-be wife live comfortably.

And we hope that the dog whisperer continues to find success and amass even more money in the coming days.