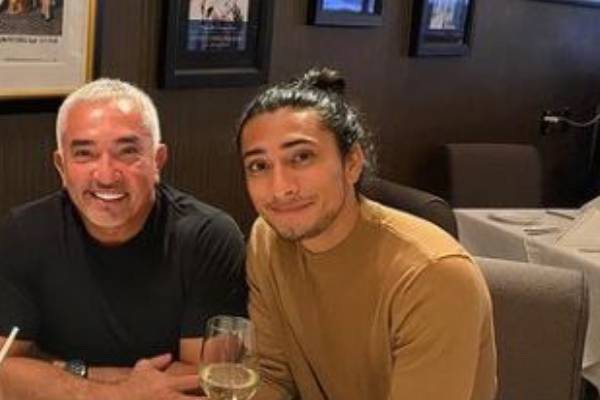 Cesar Millan is a well-known dog trainer who became famous for his television series Dog Whisperer with Cesar Millan. In addition, the New York Times best-selling author Millan has gained enormous fame and popularity around the globe. Hence, it is no surprise if fans are curious to know about his personal life.

It is a known fact that Cesar is the doting father of two sons and people are curious to learn more about both of his kids. So, here are some interesting facts about one of Cesar Millan’s sons, Calvin Millan.

Calvin Millan is the youngest child of Cesar Millan and his former wife, Ilusion Millan. As per Cesar’s IMDb, Calvin was born in 2001. However, other sources suggest that he was born in 1998, four years after his parent’s marriage.

Calvin has an older brother named Andre Millan, whom his parents welcomed in 1995.

Cesar and Ilusion raised their sons with great love and care, so, Calvin might have had a great childhood.

Calvin Millan Has A Girlfriend

Cesar Millan’s son, Calvin Millan, is in a blissful relationship with his long-time girlfriend, Arianna Melendez. The duo seems to have been dating for a long time now. Furthermore, they share the same interest in animals and nature.

Calvin Millan’s girlfriend, Arianna, is involved in the animal rescue movement and the foundation established by his dad. She is very active on Instagram and shares pictures of different birds and other animals that are up for adoption.

While both Calvin and Arianna are very open about their profession, the lovely couple has not revealed much about their love life. But we hope that the pair opens up about their relationship history in the coming days.

Cesar Millan’s youngest kid is an actor who gained abrupt success from his work. He made his television debut in the children’s television series that aired on Nickelodean Jr., Mutt & Stuff. He starred as Calvin, the dog school’s teenage teacher, in around 78 episodes from 2015-2017.

After making his debut in the educational series, Calvin also starred in the television show Dog Whisperer with Cesar Millan in 2008. After that, he appeared in the documentary Cesar Millan: The Real Story in 2012. Calvin has gained immense fame from his appearances in these projects.

His Dad And Mom Are Divorced

Aforementioned, Calvin Millan is the second child of Cesar Millan and Ilusion Millan. The couple tied the knot in 1994 but their relationship did not have a happy ending. After sixteen years together Cesar’s wife filed for divorce.

Moreover, in March 2010, Calvin’s dad attempted suicide after he learned that Ilusion planned to divorce him.

As per Yahoo Entertainment, Calvin’s parents had previously separated after the birth of his brother but reconciled soon after. But after finalizing their divorce, the former couple raised their kids with mutual understanding. Furthermore, they have moved on in their respective lives.

Plus, Calvin’s dad began dating Jahira Dar in August 2010, and six years later, in April 2016, they got engaged. Calvin has a great relationship with his soon-to-be stepmom.

Is An Animal Enthusiast

According to Calvin Millan’s Instagram description, he is a dog trainer just like his dad. He works at Good Shepherds Academy, and his girlfriend also assists him there. Furthermore, Calvin also helps his father in different dog training and rescue programs.

Cesar Millan’s son, Calvin seems to be doing great in his profession and is finding fame from his work. We hope that he lives a happy life and achieves even more success in the coming days.