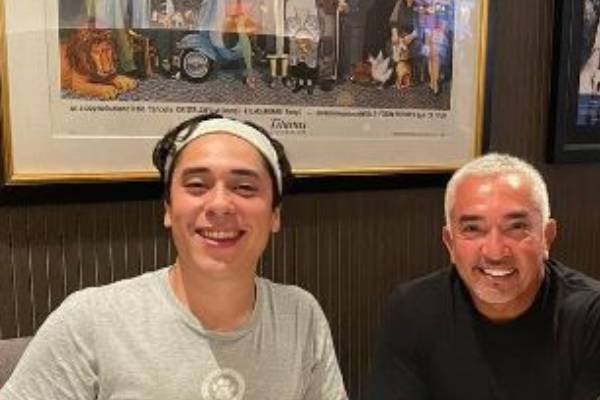 Cesar Millan, the famous dog trainer, is a doting father of two sons, whom he shares with his ex-spouse. As a dog trainer, he has amassed enormous fame and fortune. Due to this, his personal life has captured the attention of many fans worldwide who keep track of his activities.

So, in this article, let’s learn in detail about Cesar Millan’s son, Andre Millan, and what he is doing these days.

As mentioned earlier, Cesar has welcomed two sons with his former wife, Ilusion Millan. Andre Millan is the eldest child of the ex-couple whom they welcomed in August 1995. In addition, he has a younger brother named Calvin Millan, who arrived five years later in 2001.

However, some online tabloids suggest that Andre’s brother, Calvin, was born in 1998. Whatever might be their age difference, the Millan brothers have a great relationship. Furthermore, their parents raised Andre and his brother with great love and care.

Andre Millan Is A Television Personality

Cesar Millan’s son, Andre Millan, is a television star. He has worked on several projects with his dad. According to his IMDb, Millan has starred as himself in several shows like Dog Whisperer with Cesar Millan, Cesar Millan’s Dog Nation, Home & Family, Pet Talk, The Doctors, and many others. In September 2016, Andre and his dad started a new show, Dog Nation.

Moreover, in an interview with Philly Voice, the father-son duo talked about why they launched the show. Andre Millan’s dad started the show with him because he wanted to do something together. In addition, Cesar wanted to pass on the knowledge that he had learned.

Just like him, Andre Millan’s brother is also involved in television and has appeared in different series. He has starred as Calvin, the dog school’s teenage teacher on Nickelodean Jr., Mutt & Stuff. Well, it seems like the Millan brothers share the same interests and are prospering in their careers.

According to Andre Millan’s Instagram, he is also an animal handler. He followed in his dad’s footsteps and has been involved in animal training for a long time now. Going through his Instagram, we can see that he has shared several videos of him while training animals.

Andre loves his work and has been actively involved in training dogs and also rescuing them. He also assists his dad in several programs. Millan seems to be doing great in his job, and we hope that he becomes a successful dog trainer like his dad.

As for his love life, it is unclear who Andre Millan’s girlfriend is. While his brother, Calvin, is in a happy relationship with Arianna Melendez, Cesar Millan’s oldest son himself has kept quiet about his relationships. Let’s hope we get to meet Millan’s significant other in the coming days.

Andre Millan’s Parents Are No Longer Together

As stated earlier, Andre Millan is the firstborn of Cesar Millan and his ex-spouse Ilusion Millan. The couple that got married in 1994 were together for sixteen years before Andre’s mom filed for a divorce from his dad.

Furthermore, his dad even attempted suicide in March 2010 after learning that his then-wife had planned to divorce him.

Not only that, according to Yahoo Entertainment, Andre’s parents had separated right after his birth but soon reconciled. However, their relationship could not survive, and after the divorce was finalized, the ex-pair raised their boys with mutual understanding. Plus, they moved on in their respective lives, as Cesar began dating Jahira Dar, whom he got engaged to in April 2016.

Cesar Millan’s son, Andre, might be doing great for himself as he is working with his dad. And we hope he continues to enjoy a blissful life in the coming days.

The name Andre has a French origin, and it means Manly.