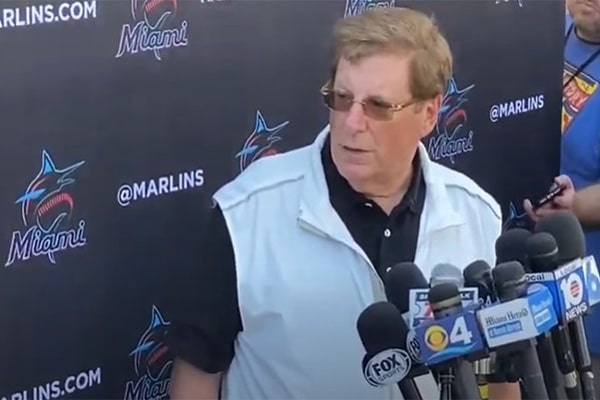 Bruce Sherman, an American businessman, is the owner of the MLB team, Miami Marlins. Moreover, he is also the founder of M4 Capital. Previously, Bruce was also co-founder of the wealth-management firm Private Capital Management.

Being an owner of such a famous baseball team, Bruce is quite popular among MLB fans. Hence, it is no surprise that fans are interested in knowing everything about their favorite team’s owner, including his personal life.

So, let’s get to know about Bruce Sherman’s wife, Cynthia Sherman, in more detail in this article.

Bruce Sherman has been married to Cynthia Leigh Kahn for about twenty-two years. She was born in Cranbury, New Jersey, to Ada Kahn and Murray Kahn.

The adorable couple who got married on July 10, 1999, reside in Naples, Florida, but are very secretive about their love life. Although the lovely pair has been living a happy life together, Cynthia is Bruce Sherman’s second wife.

Previously, Bruce was married to Marlene Bluestein. However, after some years of marriage, the ex-couple decided to part ways. Even though his first marriage didn’t work out that well, Bruce found true love in Cynthia, and their relationship is still going strong.

Talking about children, Bruce Sherman has got two beautiful daughters, Lori Shaer and Randi Stanley, from his first marriage. However, it looks like he does not have any child with his current wife, Cynthia.

Although the daughters of such a successful millionaire businessman, Lori and Randi have lived a very low-profile lifestyle. However, Bruce is often seen talking about spending and having a good time with his grandchildren.

So, either one of Sherman’s daughters or both of them is already a mother. Similarly, even though Bruce Sherman’s wife does not have her biological child, she must be very close with her stepdaughters.

While Bruce started his own business and earned a fortune, his wife, Cynthia Sherman, was an associate at Clifford Chance (formerly known as Rogers & Wells), a global law firm. She specialized in technology and intellectual property law until retiring in 2000. Moreover, she served as an outside director of Merrill Lynch Life Insurance Company of New York in the late 1990’s.

Although Cynthia prefers staying away from the spotlight, she is involved in charitable works. She and Bruce are founders of The Bruce and Cynthia Sherman Charitable Foundation, established in 2005.

The foundation supports a variety of charitable and philanthropic causes, including childhood development, advanced medical research and education, and the performing and visual arts. Moreover, the Bruce and Cynthia Sherman Charitable Foundation is the only funder of the Sherman Prize.

In addition to charitable organizations, Cynthia has also founded the Holocaust Museum of Southwest Florida. In addition, she has also helped to fund and develop the Museum’s Education Outreach Program to teach young adults in Naples to be proactive in confronting bigotry and hatred.

Thus, Cynthia Sherman is not only Bruce Sherman’s wife but also a very successful, educated, and independent woman. We hope to see her more in public with her husband. In addition, we wish Cynthia all the best for the future.