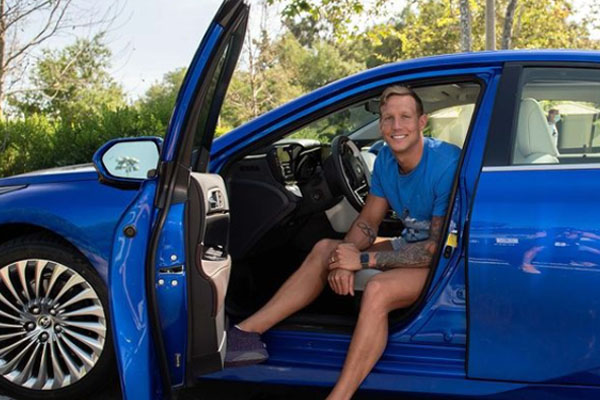 The notable U.S. swimmer Caeleb Dressel is bagging multiple awards and accolades ever since he started competing professionally in swimming tournaments. To date, he has won three Olympic gold medals, including two golds in relay events in the 2016 Rio Olympics and one individual and one relay, in the ongoing 2020 Tokyo Olympics.

With his rising success as a swimmer, Dressel is also making millions from his career. So, here, let’s get to know Caeleb Dressel’s net worth as of 2021 and how he manages to accumulate hundreds of dollars in his bank account.

Caeleb Dressel Net Worth And Earnings

As mentioned by various online sources, the Olympic swimmer Caeleb Dressel’s net worth as of 2021 is estimated to be around $3 million. Some other sources also note that his net value is around $5 million. Nevertheless, Dressel’s wealth is in millions which he amasses from his career as an American freestyle and butterfly swimmer.

So, how does this World Champion Swimmer accumulates such a huge amount to his net worth, and what are Caeleb Dressel’s earning sources? Stick to the end to find out.

Earnings As A Professional Swimmer

Freestyle swimmer Caeleb Dressel’s net worth’s credit goes to his career as a professional swimmer. To date, the Florida-born and raised athlete has competed in numerous national and international swimming leagues bagging in several accolades and a substantial amount of dollars from them.

According to the Independent, the US Olympic and Paralympic Committee pays Team USA members a good sum of money for bringing home the gold medal. For each gold medal, athletes receive $37,500 as a cash reward.

So, for bringing home a total of three Olympic gold medals to date, Dressel might have made around $110,000, which added up to his rising bank balance. Moreover, he might deposit some more solid cash if he manages to take home a few more gold medals in the current Olympics.

Besides, the natural heir to Michael Phelps, Caeleb Dressel, is also the winner of seven gold medals at the 2017 Aquatic World Championships, held in Hungary. Moreover, Dressel one-upped himself at the 2019 World Aquatics Championships, earning eight medals; one silver and seven gold. So, he might have taken home some amount as a cash prize for taking home those medals, increasing his cash flow.

Aforementioned, Caeleb Dressel’s main source of income is his career as a swimmer. Besides making money from winning various swimming events, he funds his swimming dream from sponsorships from various sports organizations and private businesses.

Dressel’s sponsors include many prestigious companies, including Speedo, Toyota, Comcast, Coca-Cola, and Nobull. But, now, winning medals during the 2020 Tokyo Olympics has resulted in more proposed sponsorships and endorsement deals. So, his estimated net worth is only increasing.

On top of that, Caeleb Dressel is also one of the swimming ambassadors of SPIRE Institute and Academy, where he signed in August 2020. As an ambassador, Dressel leads and instructs select classes, for which he gets paid a weighty sum of money.

The World Record Holder swimmer Caeleb Dressel’s net worth in millions is giving him a life full of luxuries and good food on his plate. He earns enough dollars to fulfill his needs, including riding comfy cars, getting tattoos of his choice, and, a must to mention, a lavish mansion.

Some years back, Caeleb Dressel bought a house in Florida after getting married to the former swimmer and his high school sweetheart, Meghan Haila Dressel. He even spent some time building furniture for his then-new home. However, sadly, neither Dressel nor any online sources have disclosed the amount he coughed in to buy the home.

So, Caeleb Dressel is rich enough to live in a grand house, pay his bills and taxes. Moreover, being an athlete, he must have done his life insurance as well, of which he might be paying premiums in time.

The most rewarded Olympian of all time, Michael Phelps, with whom Dressel is often compared, reportedly has a net worth of $80 million. But, he built up the figure over the course of over a decade.

We can see young Caeleb Dressel already there in terms of his performances. But it might take him some time to make a fortune comparable to Phelps. Hopefully, that time will come soon for the athlete.